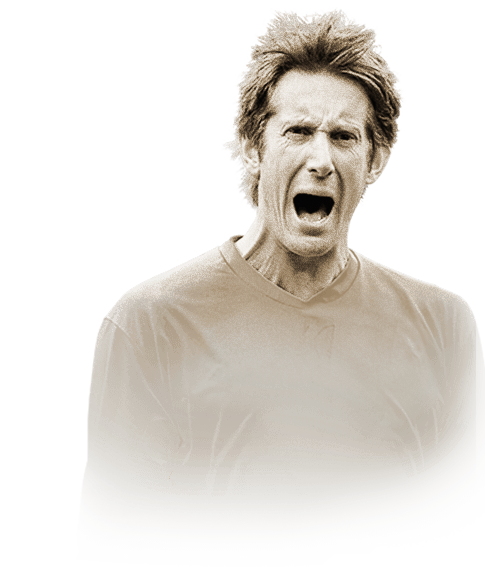 Ok ok ok, I get it, keepers are notoriously bad in this game and if you're reading this review thinking this card will magically improve your defense you're about to waste 650k. To concede less, you must defend better. HOWEVER..

If you're G1 to E3 player, like me, and the game is actively trying to sabotage you, your opponent's only shot of the game is a goal, and their Pope or Alisson has 15 saves...I'm telling you, YOU NEED this card.

But if you're one of those who sold your keeper, your entire defense, and bought Pope or Alisson, like I did, in order to compete, just to realize that they can't save anything either...THIS CARD IS FOR YOU.

Consistency is a hard trait to come by this year, in addition to Pope and Alisson I have used his baby (fantastic), his mid (pretty good), his prime (awful), and I can tell you this card is better. It sounds pathetic to shell out 650k on a goalkeeper, but this card gives me such a peace of mind I haven't found in fifa this year. I can finally say that every goal I concede is a good shot or bad defending.

He is tall, absolutely commands the box on corners, he does well if you pull him out on 1v1 and he does well if you don't, fantastic on outside the box shots, good reflexes on closer shots, very active during the game and sometimes he'll pull a save right out his butt to keep you in the game. He's an absolute menace and he feels the same every game and I love it.

Hi guys and welcome to one of my first reviews, please excuse me, English is not my native language so I might make some mistakes. First of all, for me it is hard to review a GK, especially when the player costs 1.000.000, when simply Pope Gold would be enough. I used Van der Sar with a Glove Chemistry Style.

I did Van der Sars Baby SBC and had him for 300 Games, a week ago I packed his PIM. I have to say, this version seemes to be better, also better than Pope IF. This version seems to be more consistent, he hasn´t made any mistake in my recent Rivals Games. He is really good in 1vs1 situation and had some great saves ther, also some impossible ones. He catches corners, and he seems to be really reliable in the penalty area. His height helps him to catch up crosses, what he also does really reliable. I cannot use another word instead of reliable as this is what he is. A reliable keeper who helps you to link up your players, especially when you use fullbacks as a CB from different leagues. Gameplay wise, he is 9/10, as he is reliable and consistent, but no GK in this game is a 10/10, as they will make mistakes anyway. His safes helped me to keep more clean sheets, and to win 2-3 matches, so he is a little bit of a Gamechanger.

One disadvantage is the price, obviously. He costs 1 Mio, you nearly could buy Mbappe and Neymar instead and just go the boring way with Pope. But it is really nice to have an Icon Moments as a GK, and I would say it is way more fun to play with him instead of Pope. But I would give you the advice, improve your team first before you spend the coins on him. If you have the coins, go for it.

I hope you enjoyed this Review, take one last look at the pros and cons for a small summary :)

Height -> to catch up crosses/corners

Nice to have, fun to use

Every Keeper in FIFA will make mistakes, so do not expect him to safe everything

I was lucky enough to pack this dude in prime or moments icon SBC and at first i rlly wanted yashin had him last year and was insane but when i tried this dude he was insane now i still wanted to try yashin so i did tbh yashin is possibly the worst goalie in the game as an icon or an 85 rated plus goalie now i played van der sar and his long legs help to save insane one on ones i have made about 30 saves in weekend league so yh i always get gold 3 but this time i managed an impossible gold 1 now the best goalie van der sar but the best for the money is nick pope!