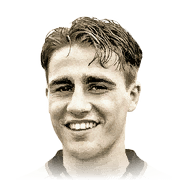 -
Sub out
Upcoming Matches
P. Chemistry
Squad chemistry
ST
60
RW
61
LW
61
CF
59
RF
59
LF
59
CAM
60
CM
65
RM
63
LM
63
CDM
78
CB
86
LB
82
LWB
79
RB
82
RWB
79
Reset
Basic
Sniper
Finisher
Deadeye
Marksman
Hawk
Artist
Architect
Powerhouse
Maestro
Engine
Sentinel
Guardian
Gladiator
Backbone
Anchor
Hunter
Catalyst
Shadow
Comments
Reviews
0
/600
Update my avatar Dos and don'ts
Top Rated
New
Controversial
Show comments
Top Reviews
Only logged in users can submit a review
A review must be written in English
At least 200 characters are required.
Compare this player to other similar players you have used(optional).
If you import your club to FUTBIN or send us an image with the player data(fill the form below) your review will be marked as verified.
Include what you liked about the player in the pros area and what you disliked about the player in the cons area.
Your review will be manually checked during the next 24 hours.
Chem Style Used
Formations
Position
Rate Player Base Stats (1-10)
Pace
5
Shooting
5
Passing
5
Dribbling
5
Defending
5
Physicality
5
Most Used In:
Submit Review

5.0
The Pitbull
36 users liked this review

I played him already 50 games and will not sell him until des TOTY. He ist absolutely phenomenal. His movement and his defending is lethal.

He just puts himself into shots from your opponent.

I paid 760k, which is okay and deserved imo.

I ve also tried mid Ferdinand, which was not that good as Cannavaro.

Tested him out in div 4/3 rivals and some Wl, hes a great card but nobody should pay 650k for this card, only use him if you get him in base icon pack.

His defending was insane, and he could track back very fast as well. Good pace, could be better though. Physicality was OK, but you can't expect much from a guy whos 5''8. Passing isnt great, and neither is dribbling

Height but if you put a tall defender next to him, he should be fine he jumps high

I got this guy from the icons swap base sbc and tested him out in D2 rivals.

The other review i read here was in division 7 or 8 i think :-D

Pace: 82 pace but feels slow in game (even with a shadow chem style)

Physicals: A BIG ISSUE! he is 1m76 and way to small to be a center back and his body type does not fit the meta. He gets bullied of by every player that is bigger then him (even neymar with 50 strenght

Passing:68 shortpassing and 46 vision, don't try to build up with this guy!

Dribbeling: 59 dribbeling 69 ball control, his dribbeling is awful. Because of all the high pressure abuse, Cannavaro wil loose every ball when pressured. Don't try to turn with him if the opponent is within 5 yards!

Defence: He has very nice defensive stats but his physicals will reduce these positive stats drastically

Conclusion: pace is slower in game, body type and height makes him very weak. passing and dribbeling is awfull

+700k for this icon is a laugh! I know everyone has Varane and Gomez, but these defenders are more value for coins then this overpriced icon.

In my opinion: 95% of all baby icons are a laugh! Even baby pele is not worth 3.5m coins in comparison to the regular gold card metas