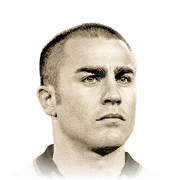 Hidden Gem for those, who doesn´t like or want to rely on the usual, op Centrebacks .

As you can see, I used him next to Kounde RTTF with all my defenders being fast and strong physically. You would probably think, that Cannavaro is a bit odd in this line of defenders, but I can assure, that he was by far the best and especially the most consistent CB I have used this year. Even though he ain´t got the best passing stats, I could always rely on his passes to the defender or midfielder next to him. The most worrying "stat" on the card is the height, if you look at Cannavaro first time. I had nearly no problem with it, even though Fabio Cannavaro is "only" 176 cm or 5'9" he makes it up with 93 jumping to his name. Unless you are not defending Cristiano, you will really have no problem. To put it in a nutshell, I liked his Prime Card in FIFA 20 and I love it in FIFA 21. For myself I can say, that I enjoyed using him more than Varane or Gomez, because he was also more consistent and fitting my style of playing this year´s game. If you want a defender to compare him to, I would say that Sergio Ramos comes the closest. With Cannavaro you have a bit less passing but a decent amount of pace in comparison with Ramos

Seeing that there wasn't much time left on his SBC and I was in desperate need of a center back to partner Upamecano, I completed his SBC. I never regretted it. I have over 50 games with him and he's an absolute beast. His tackles are too strong and good to for EA to script it back to your opponent and his interceptions are the key to winning your games. His strength and aggression is really good for someone who's 5'9" and he can easily body slim players like Joao Felix, Mane, Saint-Maximin, Mbappe, Neymar, etc. Now his pace is really somethign else. His 85 agility and 82 balance makes him feel like the fastest center back in the game. Because of his agility and balance, his interceptions are really easy to perfom. The only thing that gets put to the test with this card is his passing ability. You can only make short passes with him, but that's really all you need in a center back. Overall, if you have the fodders, he's 100% worth doing. If you're buying him on the market, still 100% worth getting.

Did his SBC for less than 700k, it's a steal, is very complete defender, pace like gomez, agility and balance like a winger, defending like a goat, passing is not too good but not bad. Use him in 4-4-2 next to baby Vidic behind TAA Toty and SMS SIF. Strikers like mbappe, CR7, Neymar, FB El Sharaawy, Rashford SIF are a cake to this card, always in good position, interceptions are unbelievable, normally can catch everyone, is the perfect defender for 1v1s. The only issues he has are strength, Lukaku and pogba are very difficult to push away from the ball, and height, but just put him next to a tall and strong CB. Since I complete him, I went almost 20 games undefeated in div 4 and went up to div 2 (I'm a casual player, haven't played WL).