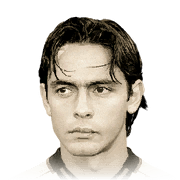 Pace is much better than expected.

I used to love Inzaghi in real life, so I try his card every year. As we all know, he is usually one of the worst icons in the game, which is a huge dissapointment for his fans, like me. But this card surprised me, he has been insane so far. I played 10 games with him in div 1, he scored 22 goals in those games. He is yet to fail to score in a game. I was using Ousmane Dembele as a striker before, and I just thought to buy Inzaghi while playing rivals and then just put Dembele back for champs, but after trying out Inzaghi, I will use him in champs. For me, he is performing better than Ousmane was. Keep in mind that you have to know how to use a Inzaghi type of player to get the best out of him, so if you aren't the best at fifa, I recommend you to try someone else unless you love Inzaghi.

With hunter he is faster than I expected, doesn't beat players in races often, but if he gets past the defender, no ones catching him.

Just shoot and he scores everytime! His weak foot feels like 5* inside the box. His shot power is incredible and he scores from angles I didn't know were possible. By far the best finisher I've used this fifa.

Nothing special, does the job but missplaces a ball every now and then. I wouldn't recommend passing it long with him.

Better than expected, his ingame dribbling stats are actually pretty nice, 84 agility and 89 reactions for example. Feels more responsive than in earlier fifas. Fake shot from pass in the box works really well with him. His Ball control is pretty smooth too, takes a good first touch.

Irrelevant stat for a striker, but he is always defending in the box from corners, and most of the time he is there to clear it which is nice.

His jumping is insane, he wins almost every header because of that. He even scored a couple of headers for me and I never score headers usually. He feels really strong too, hardly ever gets pushed off the ball. He won some duels even against the likes of Van Dijk. Only thing bringing his physical down is his stamina. Yeah 76 is ok for a striker, but he does get really tired around the 75th minute and he doesn't last fit enough to play extra time.

Thanks for reading! Check out my tiktok fin.fut for more fifa content!

Not the most reliable passer

Maybe the price, he is cheap for an icon, but you could get players like Werner or Ben Yedder for way cheaper.