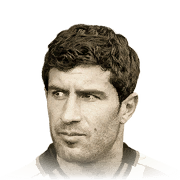 To make this as short as the time i've had him for, this man is a god, ive only had him for 5 games as a middle cam in 4231, yet he and ben yedder inform managed to carry me to division 1 with a broken controller. Hes got 3 goals and 6 assists in 5 div 2 games which could obviously be a bit better, but the card itself is flawless.

Pace, used hunter on him to max out the pace and finishing

dribbling, simply outstanding, is very agile and hard to push of the ball even tho he has 79 balance, his strength makes up for it

shooting, excellent even tho hes "only" scored 3 in 5 games, if he gets a great chance its in no doubt.

physicality, is defo more than strong enough, also his stamina is good enough

About 2 weeks ago i opened my icon pack and got Figo, I didn't really know what to think at the time but after using him in two weekend leagues and in division 1, he has been amazing. I used him as my cam in a 4231 and he played the role perfectly for me as I like my cams to be Medium/Medium.

For the first weekend, I used an engine chemistry style. This had his passing to a very good standard and helped his dribbling considerably with his average body type. On the weekend after that I wanted to try out an engine to see if the shooting/physical buff helped him more. He definitely felt different to last weekend, long shots were consistent and he could hold more people off with the buff. Between these chemistry styles it is really personal preference. Do you sacrifice better dribbling for more shooting. It all down to what you prefer. For me personally he is staying with a Hawk.

He is a nice change from the small pacey, Ben Yedder sort of cards and still is fun.

One last point, his in game face looks slightly weird. Almost looks plastic compared to some others but that might just be me.