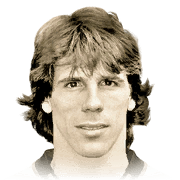 Last Thursday I bought baby icon zola. I was looking for a player who is not represented too often (like Rashford IF) so i emptied my club to afford zola. 30 WL games later im so happy i got him it brings fun back into the game and i feel way better and relaxed when i play.

Ingame I played 442 with Zola and Ansu Fati in front, Salah on the left and dembele on the right.

I have to say that zola is a real machine. He is very agile, fast and has a very good finish which has saved me several times.

All games in div 1 rivals.

Oh. My. God. This card is something else. Picked him up on a bid for about 700k on xbox so I ended up getting a pretty good deal with him. Sadly I was icon trading so I couldn't keep him for long. My god, this card is one of the best cards I have used in fut. The main reason is his body type is like a better Messi. So shifty on the ball and with the finesse shot trait, he can turn around and bang it in the top corner. The only issue is he is so weak, gets pushed off the ball super easily. Not really an issue for me based on my play style but it could be a problem for others. Some people might not have 700-800k to spend on one player, but if you do he is such a value card. I think he should be over 1.5m.

Maybe him not having 5 star weak foot? idk what else to say lol

So i was lucky enough to pack him in my Base-Icon Swap Pack and boy i didnt new what was coming for me. This guy is truly insane. Im an ok-ish player i would say and played him in 11 Games in Div 3 so far. He scored 23 Goals and set up 6 as ST in a 442/4222 with Hawk. I never managed to get such numbers with another player, he makes it so easy to score goals!

On top of that, he is creating many open spaces for my other players because he needs to always be marked by a defender.

He does very much feels like Messi with that little extra kick like the other guys have written. If you're looking for this type of player, you will be definetly happy with Zola!

Shooting (solid on his WF)

Passing is ok for a Striker