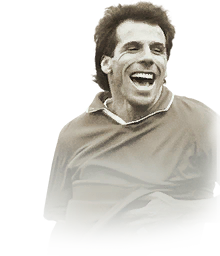 Zola is an absolute gem this year! I've used him in past Fifas, but I'd say this moments card is the best I've used of any of them. He has quick responsive dribbling, accurate passes, and most importantly takes up good positions on the pitch. I use a Hunter in game at LS in a 5-2-1-2 formation. He feels much better with Hunter when compared with the engine chemistry style. I've tried both, but the extra bit of pace allows him to further utilize his great positioning, mainly because his dribbling is already good enough on its own.

Pace (8/10): He isn’t the fastest player on this game, but that doesn’t mean he isn’t meta. His short and lean body-type followed up with great stats makes him very agile & very quick. He loses two points on straight-line sprint speed, but his acceleration is up there with the best.

Shooting (9/10): I play him at LS purely because his right footed finesse shot is absolutely deadly. Do not hesitate to shoot just outside of the box on the half-circle; he nails them consistently. In the box his power shots are not the greatest in the game, but are more than consistent enough to use each game.

Passing (9/10): Passing is near perfect on this card. He doesn’t quite have the long passing of a De Bruyne, but his short passes are crisp and accurate. Quick little one twos work very well with him.

Dribbling (9.5/10): There are only two players who I have used with better dribbling than Zola, and they are TOTY Messi and Maradona. He is just below them, and quite frankly I enjoy Zola more as he is stronger with his left foot when compared to Messi and Maradona. He holds the ball tight to his body and is able to do tight intricate turns inside the box to create space for himself. A joy to use!

Attack Positioning (9/10): He isn’t the most aggressive on his runs, he has a mix of coming short for the ball and attacking the box. For me he always is in the right place at the right time.

Weak Foot: His weak foot is 4.5 stars no doubt; he consistently hits shots with his left, as well as the ability to make accurate passes too.

Stamina: Zola’s only downfall. I’m not a big stamina abuser, but he gets tired come the 65th minute mark every match. For me playing him at LS allows me to get 80 solid minutes out of him. At CAM he will need to be subbed off in the second half. I wish this wasn’t the case.

So I was looking for an icon CAM for my team and I picked up PIM Zola for what I thought was a good price. He since dropped 100k. However, I don't even want to sell him right now.

This card is probably the best value for coins PIM that you can get. I decided to apply the Engine chemistry style because his shooting is already great. He feels very responsive on the ball although his sprint speed isn't super insane. His playmaking abilities are fantastic, he positions himself very well on the pitch. His most important trait is definitely the finesse shot trait. Zola has the best finesse shot I've seen this FIFA. I was scoring them like crazy in Weekend League (you can see some in the highlights video). His finishing was reliable for me and his weak foot could easily have been 5 Stars.

The only negative of this card is the physicality, especially 78 stamina. I played Zola as a CAM with stay forward instructions, but I still had to sub him off after 75 minutes in most of the games. It's not ideal. He also gets bullied by stronger players, but he feels better than 58 strength.

Overall, this card is 100% worth the price. If he gets an SBC I'd do it for sure. I can really recommend him for anyone who likes scoring finesse shots and not just scoring sweat goals with Mbappe.

I genuinely really enjoyed using this card despite some obvious flaws which are clear from looking at the stats. His dribbling, agility, passing and finishing are absolutely glorious; he often glides past players as if they aren't there and his finesse shots are out of this world, whilst the outside foot shot trait means his 4* wf may as well be 5* given consistency of his finishing on either foot. I opted to use a hunter to max out his pace but a hawk or catalyst also came in handy dependent on whether he was deployed at CF, CAM or ST.

Unfortunately, his stamina and strength (or lack thereof) are real problems. I was forced to input conservative interceptions and stay forward instructions and am unable to play any kind of pressing football unless I'm willing to withdraw Zola around the 70th minute. He will regularly get bodied by most players he comes into a 50/50 with and despite his impressive acceleration, the lack of strength often means he cannot get around the defender using a bridge or latch onto a through ball unless his path to the ball is clear.

I will say this card is brilliant if you are willing to build your team and play-style around him but otherwise is a luxury, albeit a highly enjoyable one.