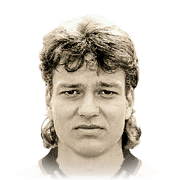 Jari Litmanen is considered to be the best Finnish footballer of all time, with spells at Ajax, Barcelona and Liverpool.

While his later career was marred by injuries, he still went on to get the most caps for the Finland national team at 137, scoring 32 goals in the process.

In FIFA, he seems to be quite an underutilized icon, and only costing from 350-400 thousand coins depending on platform, he doesn't have that much hype either.

Looking at his FIFA stats, he's got excellent finishing, composure and stamina, but his low balance, strength and long passing does affect how you use him.

With his only trait being Finesse shot, he's quite a blank slate in that regard.

Looking at the team I used him in, I primarily played a 3-5-2, with Litmanen at Striker, as I found him to be a scoring threat more than a provider. My instructions for Litmanen were to run in behind to attempt to utilize his finishing skills.

With Jari, I'd only recommend utilising him as a striker since his shooting stats are so much better than his passing.

With all that being said, let's get into this review.

I reviewed Eden Hazard the other day, and I've found that Litmanen's passing is exactly the same: Short passing is great, through balls are excellent, but you have to keep the ball on the ground with Jari.

While having 86 short passing, 85 vision and 84 curve is good, he's lacking in the rest of his game, and because of that, I'd keep him at striker.

Moving onto his shooting, and this is where I'll have the most to talk about.

He's got 92 positioning, 92 volleys and 91 finishing which is impressive as it is, but he plays even better than that.

I've not got many crazy finishes with Litmanen, but what I found was that he was always in the right place, at the right time.

And when you do have the ball in the box with him, it's going in. His finishing was very consistent, and because of his positioning, he would usually get to the ball in a better place than most to make the finish look easy.

I'm surprised he's got zero hype around being a striker, because there aren't any icons with stats this good at this price regardless of position.

Next, his dribbling. This is one that surprised me a bit, because he's actually a decent dribbler.

He's only got 3* skill moves which limits his abilities, but the 80 agility and 80 dribbling feel like they should be at least 88 each. His dribbling is definitely good enough to be an out and out striker,

and I'd say it's good enough to act as a false 9 as well.

The only con here is that his balance is quite poor at 75, but everything else is absolutely solid.

Now, his physical is an interesting one.

Despite only being 64, his important stats in stamina and strength aren't too bad at 90 and 67 respectively.

The issue comes with the combination of his strength and balance. He gets thrown off the ball quite easily.

The only positive in the physical department is that you won't need to sub him off. He strangely kept most of his stamina right until the final whistle.

And Lastly, his pace.

At 83, he felt surprisingly fast. He's not fast enough to beat defenders like Militao and Klostermann, but I saw him outpace Ramos enough times to keep my faith in his speed.

If you're looking for a playmaker, look at players like Rui Costa and Bruno Fernandes but if you need a cheap finisher icon, here he is.

His shooting is some of the best I've seen, and the rest of his stats are good enough to say he's decently well rounded.

If you only need orange links for your striker, and you're on a budget, I'd recommend 88 Litmanen.

Please let me know who you'd like me to review next in the comment section down below, but with the review now over, I wish you good luck for your next weekend league, peace out.

Weak On and Off the ball