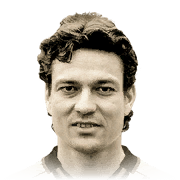 I got him in a pack with an icon for swaps and was logically upset, but I needed a cam and I decided to play with it.

I used Litmanen with hunter in this squad https://www.futbin.com/21/squad/361944

Jari is not the fastest player, but he can run away from the defender if he initially won the position.

He finishes very well with a 95 finish and 4 weak foot, but lacks punching power for longshots.

Compared to David Silva 89, he passes worse, but in general he almost never makes mistakes in passing.

The only plus is composure.

Awful, he doesn't jump, gets tired by the 70th minute without going into defense, badly closes the ball with his body and aggression 22 is a joke

In general, Litmanen is better than Inzaghi and Shearer, and you can even try to play with him, but don't by him