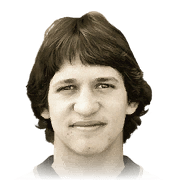 It's the first icon I get this year, before I was using Lewandoski which was strong but also quite slow so I decided to substitute it whit this card which other than having overall good stats is also quite fast in comparison. I have now played more than 20 games with this icon and I feel I have made the right choice. I have a lot of fun playing with it since it is very fast and almost impossible to stop when he starts running in front of a defender, even if the defender manages to reach him Lineker can keep him behind with his strength and balance which seems way higher in game. Even Lewandowsky, who had incredible physical stats couldn't do this so well because of his lack of speed which instead Lineker owns. The passing feel also good despite the poor stats and I had no problem with it, instead, often he provided solid through passes which translated into subsequent goals. The dribbling is also fine for me, nothing crazy for sure, especially for the 3 stars skill moves but he gets the job, I especially like doing stepovers because he gains a big boost after and it. Finally, let's say something about his shooting. I wasn't fully convinced, even though it's power and week foot are superb what's bugging me is his finesse shots, I tend to use them a lot and sometimes he missed me sitters which you wouldn't expect from a player having 94 finishing. Apart from this, his shooting is phenomenal, even outside the box it can be deadly, you just need to remember not to press R1/RB too often.

Oh, Gary, how did i go so long without you?

Let me start from the beginning. I've always had a special place in my heart for 1980's English Football. There seems to be a an aura about that era, a certain je ne sais qoui. Perhaps its the what might have beens that came to define that era of the English game: What if England beat Argentina in '86 or Germany in '90, what if English Clubs were allowed to compete in Europe after the Heysel Disaster. England had some incredible players and teams/clubs during that time frame, and its such a shame that they have so little to show for it. My fascination in this era introduced me to some exceptional players i would not have otherwise known of; Kenny Dalglish, John Barnes, Glenn Hoddle (whom i hope EA gives an icon card soon) and of course, Gary Lineker. Just find highlights of his 85/86 season for Everton and its everything you'd want in a striker: anticipation, pace, good running, finishing, heading, two-footed. Those highlight reels and game replays i watched of him motivated me to buy his Legend card in Fifa 15 and he was, frankly, the most broken card i have ever used in a Fifa, having all of the above listed qualities as well as being able to score from ridiculous ranges. So when i got the chance to buy him again this year, there was never any question about whether i would, only if he'd live up the the benchmark he set all those years ago. They say you should never get back with your ex, but my god has it been worth it

Gary isn't the fastest player in the game by any stretch, and realistically he doesn't have 10/10 pace. its 9/10, but i'm also using this section to review his attacking A.I. What makes it his pace 10/10 in this game is how he uses his pace by running into the right spaces and channels at the right times. This man is defender-phobic; if a defender goes near him or tries to cover the wrong space, Gary will take advantage of it everytime. you dont need to spam LB to get him to make runs, especially on long ball, but those work too of course. Also, his ability to beat a high defensive line and recovering defenders is unmatched. if you time the thru ball correctly, its a goal. varane and mendy ain't catching this man to thru balls unless they have a 5 yard head start, and even then Gary can still cause issues with his physical, which i will get to.

If he gets a scent of goal with that nose of his, there is only one conclusion; Goal. when he's in the box and a shooting lane opens, just shoot it and he will score. far post, near post, chips. the man even scores long shots for me like, just the good old days of Fifa, and that brings a smile to my face everytime. i will admit, his finesse shots are inconsistent at best, but he is one of the players in this game with specialized shooting animations for power shots, so you don't need finesse shots at all with this card. The biggest surprise with his shooting and with the whole card is the weak foot. HE HAS A FIVE STAR WEAK FOOT and no one will tell me other wise! Of the 150 goals i've scored so far, i'm sure 2/3rds of them are on his "weaker" left foot. he's even scored more long shots on the left foot. It's truly bizzare, but i'm not complaining.

He feels very nimble on the ball and often dribbles his way out of situations you would expect. The obvious downside is the 3 star skills in this department, but if you know how to use bridge and RB (R1) dribbling, its not a big issue. He rarely feels clunky or sluggish on the ball, and paired with his physical, he is a nuisance on the ball and defenders struggle to get him off the ball without fouling. if you're a skill spammer he's not the card for you, then again if you were, you wouldn't have read this far anyway.

Defenders just dont get him of the ball. Even players like Varane and Van Dijk struggle to out muscle him. i think it might be his body type matched with the dribbling and physical, but he is quite adept a hold up play or muscling a defender to create space.

He presses well from the front and intercepts the ball somewhat often, but this is not a strength of his game and there is nothing more to say on it

So, in conclusion, he's even better than i could have hoped for. In 100 games (70 Division 3 and 4 Rivals Games and 30 FUT Champions games with a Gold 3 Finish) he scored 150 goals. He is very good value for money at 300k. If you like a striker who will run the channels and finish everything and if you have a special attachment to 80's football, he's you man. Best used as a single striker (4-2-3-1 for me), but can work in a two striker. I'm not a great fifa player, but i like to play the game using players that fit my philosophy of how the game should be played and that make the game fun. A striker like Mid Gary Lineker is a hidden gem who makes Fifa 21 feel like Fifa 15, and thats as fun as this game could get by any definition.

I packed him in my mid icon pack and assumed he would be awful but when I looked at his stats I thought I'd give him a try and boy this was one of the best decisions I've made this year. I used him at striker with Rooney as a cam and their link up play was excellent. In division 3 I scored most goals from through balls as his acceleration lets him speed away from most defenders as well as this, he can find loads of space in the box as he can slither away from most defenders. Lets move on to his finishing, his finesse shots aren't very reliable and most times will go past the post mainly because of his low curve. But except for this he is one of the most clinical strikers I've used his across goal shot have a 90% chance of going in the back of the net and his weak foot feels 5 star as he can finish everything. his dribbling isn't the best hence why I put a engine chem style on him after this dribbling and pace boost he feels a lot more agile but still nothing close to anyone like Mane. But overall, he is an excellent player if you want to have some fun with an icon striker at a low budget.

Strength to hold off defenders