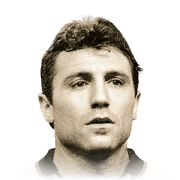 What words do I have to describe this man? He's literally unbelievable. I packed him on the second week of divison rival rewards as untradeable, and I can tell you that I'm never going to get rid of this card. He's incredible, and I've never used a card like him. If you shoot across goal, it's going to be a goal every time. He is the best striker on this game at the moment, hands down. The goal record he has includes NO SINGLE PLAYER GAMES. All of my games have been online in rivals and weekend league.

the reason I am writing a review is because i need to spread the word. i am a very lazy person so i will keep this short and sweet. i am a regular gold 1 player (sometimes elite3 sometimes gold2)

this weekend i started with a record of 6 wins and 7 L's i was using an untradeable team because of toty market drop i had gone liquid and i knew i needed help from a special player to get back on track. i got butra, he didnt work i then thought to myself that stoich last year was cracked for me and i bought baby stoich and he was cracked at the st position. i started winning after i got him, i managed to pull it back and got gold 2, he ended with 14 games played 23 goals and 13 assists in a two striker formation with mbappe.

stamina starts lacking around the 80th

doesn't have finesse shot trait or outside foot shot

I was over the moon when I opened my base or mid icon pack and saw the Bulgarian flag flash up on my screen. Stoichkov has been an excellent player for my team ever since I first packed him. His card has very good pace, shooting and dribbling - the left foot is particularly insane. He also has good passing for a striker. Free kick accuracy, curve and penalties are brilliant, making him excellent for taking set pieces.

For me, there isn't much wrong with this card. The only issues are the low strength and the three star weak foot. Even still, shooting on his weak foot at close range will still sometimes get you a goal, it is just shooting outside of the box with his right foot is bad.

Overall, i would highly recommend this card. Very fast and agile with excellent shooting and surprisingly decent passing. Base Stoichkov is by far the best value icon under 500K coins.

. Low-ish strength means he does get bodied

I pulled this guy from the base icon pack in swaps. It honestly could have been a lot worse but still could have been better. His face stats look insane and his in game stats are also really solid. But the card is absolutely ruined by the 3* weak foot and the medium/medium work rates. If you are able to get the ball onto his left foo (strong foot)t a little outside of the penalty spot he's usually able to whip it in, but in 1v1 situations with the keeper he's garbage on both feet. It's shocking how many chances he's blown and kicked straight at the GK. Im a gold 2 for champs and div 4 rivals player, but he cant finish on anyone rated higher than 82. His weak foot also affects his passing a ton. I don't trust him to play through balls to anyone. I put him in for 88 Haaland who was an absolute monster. Stoichkov is alongside neymar and sancho and 88 gnabry in attack.

If you can get the ball onto his left foot in a not 1v1 situation he may score. With a hunter he can show a decent burst of pace on occasion. Thats literally it.

77 strength but gets bodied by every player on the pitch. His dribbling is not great but not terrible. Passing is average and gets worse on the weak foot. 1v1 finishing is terrible. Misses easy headers all the time and loses arial duels. The medium/medium work rates make him a pretty small presence on the pitch.