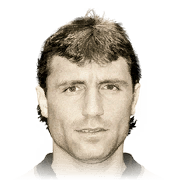 At first i need to say that i am a german and my english is not so good.

Stoichkov is the best player in my whole team. I played him as a striker with Hawk and he's so good. The dribbling and shooting is unbelievable. His anticipation is very good too.

In my opinion you need 2 types of strikers in fifa 21. A fast one and another fast one. Stoichkovs Partner is Werner(der Uhrensohn) and both cards are a dream. They harmonize perfect.

the links he get and a lot more

and the medium medium workrates

This is my 2nd review this year and this is a good one, what this guy has done the last weekend league for me is just amazing, I don't see my self as an excellent FIFA player Im on DIV 2 and a constant Gold 2 or 1, and I've made my first elite thanks to this guy.

Stoichkov has the best shooting I've tried this year and the continuation between his pace, strength, and good agility makes him unstoppable.

I used him as a striker on a 352 alongside Felix and it was just an amazing combo.

3* weak foot that is bearly noticeable