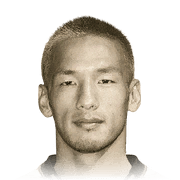 So, I needed an Icon who could play LAM to have full chemistry in my team, since Neymar is my ST. I bought Nakata, because I really wanted to see how this card plays in-game. 290k for a Prime Icon? I'm in. I built my team and we were off to go.

First match I was pretty concentrated to give him the ball multiple times to see how he feels in game. Very smooth touch, great shooting and filthy passes to my CAM and my ST. He ended the first game with one goal and two assists. Second game the guy went absolute nuts: 2 goals and 2 assists. Unbelievable finish in the box and a great long shot from 30m (I would guess something like that). Third game he scored 1 again and made 3 assists. What I'm trying to tell you is: don't sleep on this card, he's an absolute baller.

So Nakata, David Beckham from Asian. Let's be honest he is maybe one of the most underrated Icons in this game. Last year he wasn't that special, but this year is a whole new story. He feels very agile on the ball, has some great passing ability in his legs. And you wouldn't believe it, he could even score some bangers. He really feels like a ninja, if he is behind you "chop" you don't have the ball anymore, It is just amazing. The feeling that you get if you score a goal with a player with 77 finishing and a price tag of around 400K, that is just indescribable. But let's face it, yeah this card isn't near perfect, of course, he doesn't score from inside the box, he scores also from outside the box! what did you think I was going to say? That his 77 finishing is a problem, nope no problem at al. This guy is just perfect for the price tag it has. But oke, now I have told you how amazing this ninja is, let's introduce how I think you should play with him. I play him in the striker position with POTM Felix. I gave him an engine as a chemistry style. why, because I think it is unnecessary to boost his shooting. (with an engine you make him better in every aspect he needs.) If you have the ball with him you can dribble a little bit, but not to much keep it simple. You can pass with him from any position, no problem. (360 passes sometimes works, but not all the time.) With his shooting, there is one thing you need to know, keep it simple. You just need to look for the right angle and shoot always with a finesse shot. (Works every time for me, maybe because of the engine.)

I used Hide last year and fell in love with his cards, so I decided to by him again this year and has failed to disappoint. I can tell you for 250k, this card is an absolute bargain, he is easily the most underrated icon on the game, if you pack him, try him out he's immense

finishing can sometimes let this card down

finesse shots can be bad at times