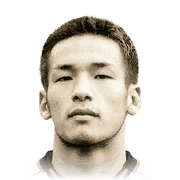 Needed an icon to glue my team together, and decided to look past all the negative feedback about Nakata and pick him up. I have to say, I was not disappointed. He's small, quick with the ball and weirdly resembling FIFA 20s scream Giovinco, which i absolutely loved. With an engine he's even better, untouchable with the ability to send striking passes at almost any given moment. Amazing shot power, scoring penalties with him is a breeze and freekicks aren't as bad as you would think they are. However, he's not all good. His aggression is absolute dogshit, making it feel like he doesn't even want to play the game in certain situations. And when it comes to finishing, he's just not cutting it. Seeing as I've had several times where he misses wide, even in situations where I myself would've put it in the back of the net. But what do you expect from a 300k icon? I at least can say that I don't regret buying him, and will probably keep him in my starting squad for as long as he's a viable player. Or until i pack Pele in my Silver 2 rewards and can buy his prime.

Cheap (seeing as It's an Icon)

There are better CAMs out there