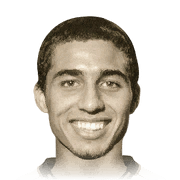 First, I have to tell that i don't know english well but i will try to describe him as good as i can.

So, the most important think is that David is perfect player if you will use R1/RB + Cross, all of my cross to him goes straight in to the net, so i can say that he is perfect for that, his dribbling is not as good as ben yedder or mane but it's not so bad, his shooting is really good i play him with hunter so it was boosted, pace (with hunter) was really good he was fast. Short pass is good, but long are not really accurate but for me striker don't need passes like god. Physicality is so good he is so powerful and he cannot be pushed through anybody. Stamina if you don't use agressive interceptions he will can play full time and first half of overtime (maybe full time overtime). He is absolutely the best striker that i used better than L.Suarez (IF), Aguero, Firmino, Griezmann, Benzema and Kane.

In the 1m i change formation for 4-2-3-1 (lean) and Gk - De gea; Lb - Telles; Cb's - Kimpembe and Aaron wan Bissaka; Rb - Dumfries form bench; Cdm's - Kamara and Valverde, Cam's (from the left) Sterling, Ben yedder, Hazard; St - Trezeguet; (In my opinion this is strange and controversial tactic but i play like that so long and i love this tactic, if somebody want my custom tactic write a com and i will write that)

I packed him in my icon pack so... I wasn´t really happy about him. (second icon pack i get shearer (-: )

And after 100 games i´m still unhappy about him...

I´m german so the English could be better

Baby David Trezeguet is simply unique. There is something about this card that I am really enjoying at the moment, and I don't know how, but when he scores, he just do it in his way. I really liked how EA took Trezeguet's playstyle and printed it almost perfectly in the game. His legs' movements when he shoots the ball look exactly like his real-life movements, as he widely opens up his lower body to leave surface-to-air missiles that can reach even the most remote angle in the net. He really is an old school scorer who can also pull of some bizarre, goofy looking skill moves, given his strange and conflicting abilities. Let's have a detailed look to my personal experience with him:

PACE: his pace is quite decent, but don't expect anything crazy. The card pretty much reflects what you will be given in game. He can even surpass the most pacey defenders (Varane and VVD) at first touch, as his ball control is quite high for a player that tall, but given the low agility, you cannot really sprint like a gazelle. Overall, his pace did not surprise me, but he can make his runs when given the opportunity.

DRIBBLING: this is probably the most conflicting section of Trezeguet. His agility is low, but to be fair, I found him to be much more reactive than, for example, Haaland 88, which was terrible for me in this category. His ball control (85) actually helps him a lot mantaining the possession even in narrow areas, and as said with pace, I really enjoyed his ability to control the ball and sprint when through balls are given to him. He cannot really move like a Neymar, but he definitely puts effort in everything he does with the ball at his feet.

SHOOTING: almost god-like. His shooting is definitely the reason why I am loving this card, in all his possible frustrating aspects. I never had a striker who was able to shoot the ball like him. I am really guessing he actually has some unique movements that are specifically given to high rated players. He is particularly able to make shots which start "low-profile" and then increase in height as they go through the net direction. I am not a native speaker, and I might not be able to explain this as I want... but you can try it to notice this particular feature of his. His shot power is definitely very good, and given the 4* weak foot, he can basically score with easy with both feet. He can really angle to ball in some unique ways. The only bad side is finesse shots, as he cannot really curve the ball unless he is in front of the keeper.

DEFENSE: n/d. His heading is good, and he will most likely score on some crosses, but given his low jumping, it's not like he will try everytime. He needs to have a discrete advantage over the defender, otherwise it will be kind of hard to put it behind the net.

PASSING: not particularly good. Short passes are ok, but long throws are definitely not his thing.

PHYSICAL: another section where he actually surprises me. I don't know if it was just random, but between all his markings, I scored a couple of goals after regaining the ball in offense. His aggression sometimes feels more like an 80 than a 51. His strength is quite good. He can definitely keep up with defenders.

Overall, Baby Trezeguet kind of surprised me. I bought him for 180k out of curiosity when I was reading people bashing him as one of the worst strikers out there, but to be honest, I found him to be the best, funniest, most cynical strikers out there. Yes, he is goofy, he has cons, but he is damn fun to play with, especially if you have seen him playing IRL, as you will notice how his shooting is really similar to the way he was playing in his years. He really feels like an old school striker, who waits for the ball and puts it over the keeper. In addition, his double 4* actually makes the difference. Being able to shoot with both feet and to pull some skill moves is very helpful with this, otherwise it would have been kind of hard to keep up with most defenders. To conclude, I really enjoyed him, but that does not mean I want to change your mind. Every playstyle is different, and if you are just looking to maximize every opportunity, this card won't probably do that... but still, he is quite amusing to play with.

I believe he is suitable for people who really like to play with tall strikers. I also pulled 87 Dalglish, which looks terrific on card, and actually is as people really likes him, but I was not able to extract all of his potential. There is just something about tall, goofy, "skillful" players that I enjoy a lot, and 86 Trezeguet is quite unique, at times!