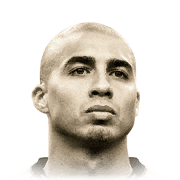 Ive had my eye on his 86* card for a long long time, but always found excuses not to try him out.

so when i had a fit, and sold my entire team, vowing to never play fifa again, one week later, i found myself building a new team.

half of the team was allready in place, so i had to fill the most important position., the striker.

In the box, he rarely miss, be it on the ground or in the air, his finishing touch is deadly, with that said, getting him into the box can be tricky, since nowadays everyone has a cb that outpaces him. so you have to play him into the box, but he is not entirely helpless alone. He does feel a bit on the heavy side, but nothing too bad.

now his game stats my not seem like much, but keep in mind that he plays along with neymar, baggio 91* felix potm, robben flashback (fati potm before him). when i build a team, i like to keep a fluid offence so that its harder for my oppont to shut down my attack since every one of my players are lethal in front of goal, but among those players Trezeguet really brings a different level of finishing. He is specially dangerous in corners, whereas the only player ive had that was more effective was Ramos.