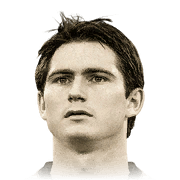 I play in DIV 3 and this man has really helped me. I play him in a 4231 as my attacking CDM

Dribbling: 8/10 Better than what the card stats show. of course, you're not gonna be skilling with this card, but he gets the jobs done. his close control dribbling is pretty good, he can dribble if needed

Shooting: 9/10 Oh my he has some CRAZY good long shots. I can't count how many times I've been behind and franky comes to save me with an absolute bullet.

Passing: 9.5/10 send a high through ball with a pacy forward and its a 1on1. long and short passing is of course amazing

Defending: 710 not the best. but bearable if you don't have him as your defensive CDM

Physical: 7/10 Good stamina, strength and aggression sometimes lets him down.

In conclusion, he´s a very fun player to use even tho he doesn't quite fit the meta, so I would buy him if you need someone to shoot from long range and good passing distribution and just, in general, having fun with trying different cards

From being one of the worst cards last year to being one of the best(for the amount of coins) this year. Of course there are better CMs for about 300k than Lampard, BUT if you need an Icon this is your man. I play him as a CM next to more defense Khedira in a 3412 formation. His passes are absolute worldclass, his longshots and also his finishing too. 75 Pace ist quite okay for this position but i think you have to give him a catalyst, hunter or shadow to boost the pace to maximum. Of course he is not as agile as the likes of mertens, but he isn't nearly as clunky as last year. His stamina makes him to a perfect box to box player and with his 77 interceptions he gets a lot of balls in midfield. Surely he isn't a game changer but sometimes he can make the difference scoring a winning long shot screamer in minute 89. if you have a lot of coins and need an icon for chemistry, 300k is nothing compared to his abilities.

Low price for an useable icon