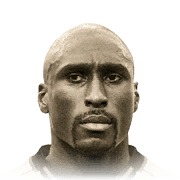 I was lucky enough to pack this card in my Mid or Prime Icon pack. I came here to see some reviews and saw none. I assumed that other people may be packing this card as well so I decided to write one myself. I used him for 23 games in Div 4.

Pace 8/10 - His Pace is good for a Center Back. Someone like Gold Varane definitely feels faster but I feel like he does have enough pace to catch up with a counter attack. Unfortunately his dribbling makes him feel a bit slower, and it restricts his pace because if you are trying to turn around to catch up with someone it takes a while.

Defending: 9.5/10 - This guy is very solid at defending. If I need him to make a clutch tackle I can count on him to do it. He wins almost everything, LT+RT/L2+R2 jockeying is very effective with him in my opinion, and his autoblocks are pretty good too, although from what I have seen I think PM Boateng's autoblocks are better. His positioning is also great, although sometimes I do find myself wondering where my defense is but I feel like that happens with any defender. He is usually where you need him to be. Lastly, his heading is also amazing.

Physical: 9.5/10 - His strength is amazing and if you LT/L2 with him it seems like he will body any attacker off of the ball. His stamina is good enough to easily last all game. The reason I gave him a 9.5 and not a 10 for physical is because he still gets outjumped by players like Van Dijk during a corner kick, for example.

Dribbling: 3/10 - After using this card I finally understood the phrase "turns like a bus." As I mentioned previously, his dribbling hinders his pace a bit and if the attacker gets in behind you then good luck turning around to catch him. I find he is still great if I make sure to not overcommit and if I'm patient enough to time my tackles well.

Passing: 8/10 - I found that his passing is perfectly fine for a center back, his short passing is 76 and I feel comfortable passing it out of the back with him, although he does make some passes every now and then that stray a bit far from the receiver, but it's nothing major.

Shooting: 6/10 - Weirdly enough, one of the games I was playing in my opponent went afk, so I decided to just let one fly with Campbell outside of the box and he banged it into the top corner. I don't know if my opponent being afk had any influence on it but it was surprising to see. Unfortunately he doesn't seem very effective during corner kicks for me and I find that PM Boateng gets to the ball more often than him. That being said I am not very good at corners at all, I just send a RB/R1+X with EOAE Rooney onto him and hope for the best.

Overall: If you packed him and have him untradeable then don't be hesitant to use him, he is a very solid CB but I just feel like his 750k-1mil coin price tag (depending on your platform) isn't worth it over someone like Gold Varane who is just around 100k. If you want to try him then maybe go for his Base version since it has better pace and a little bit better dribbling. That being said I feel like he is very comparable to Player Moments Boateng. From my experience, Campbell's defending and pace is better than Boateng's, but his dribbling is much worse and their physical is about equal.

Outjumped by Van Dijk on corners