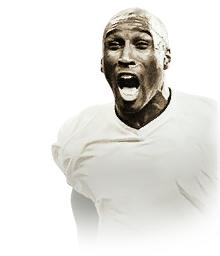 I used him as my Right CB in the 4-2-3-1 formation and applied the Shadow Chemistry style to boost that Pace primarily. I also tried him with the Engine Chemistry style for 2 games. I played 4 games in Division 1 Rivals. Let’s begin.

1.4 million is quite steep for a CB to be completely honest. You can pick up equally comparable players at a fraction of the cost :/ A fair price for him would be 700k-800k coins.

I would say he is a meta CB if he had better dribbling capabilities, but his dribbling and overall responsiveness will let you down in heavier gameplay as he would feel extremely rigid. His lack of manoeuvrability will be the reason many pros don’t select him in their teams for competitive gameplay!

But apart from that, for a CB, he is outstanding in terms of his PACE, DEFENSIVE and PHYSICAL abilities and his Defensive AI is exceptional as well, and if you’re an England or a Gunner, you will absolutely love this card, as he is truly a defensive beast!

His pace overall is quite impressive for a CB. A combination of 86 Sprint Speed and 80 Acceleration when boosted by a further +10 with the Shadow chemistry style, make him feel quick while tracking back as well as jockeying. He could easily catch up to any on-rushing attacker running parallel to him and managed to push them of effortlessly. He is one of the faster CB’s that I have used all year, without a shadow of doubt.

Good enough to get the job done. Nothing outstanding, neither poor in any aspect. Using an Engine will further help his cause in the passing department. His 3 star weak foot is safe to make short passes with too. So just keep his passing to simple short ones or the occasional ball wide to shift play, and you should have no complaints there wrt his passing.

He has insane defending stats across the board, and when further boosted with the Shadow chemistry style, they are all MAXED out. He was superb defensively on the stay back while attacking instructions, and NEVER pushed out of position unless I manually prompted him to. The Low/Medium work rates were totally on point as he held his position perfectly. He has a nice body type as a defender, similar to the likes of Rio Ferdinand or the Flashback Boateng card which is close to the ideal META body type for a CB in this game and this enhances his defensive wing-span and his AI’s ability to make auto-blocks and interceptions.

His tackling, positioning and rate of intercepting my opponents play were outstanding! Hence, defensively he is an absolute monster at the back.

THE ULTIMATE BEAST OF A CB.

98 strength for a CB. He will push off ALL on-rushing attackers/defenders/midfielders (even his own teammates) effortlessly. His wide body-type improves his ability to shield and bump players off. His 83 stamina is more than adequate to last him the whole 90 or even 120 mins effortlessly. He’s 6”2 in-game which is a great height, and with his 98 JUMPING he will win you ALL headers he contests. He is a lethal weapon from corners with that 99 HEADING ACCURACY! He also has 95 aggression and will remain touch tight to your opponents attackers and as his AI presses them constantly.

I scored an ABSOLUTE BANGER from OUTSIDE the box! But that was an element of pure luck and some skill on my part :P Word of advice, don’t bother shooting with him unless its a toe-poke underneath the goal. His heading is on another level though! (Idk if that counts as “shooting” technically)

His dribbling and responsiveness weren’t the greatest tbh and could be classified as slightly below! He has appalling dribbling statistics, with a combination of 52 Agility, 54 Balance and 44 Dribbling and hence I needed to make him feel more responsive in-game. I switched to the Engine Chemistry style, and that helped him massively. The difference in his jockeying and manoeuvrability was significantly improved as compared to when I was using him with the Shadow Chemistry style.

Without a Chemistry style that boosts his dribbling, he feels very clunky and rigid to turn and jockey with hence, giving him the Engine chemistry style is A MUST imo! His defensive stats don’t need any further boosts tbh, and you’re better off boosting his dribbling and passing to make him more complete in game.

Well i decided to do his sbc after playing with his loan for a while. I have to admitt he feels a little different, because everyone plays agile Fast cbs this fifa. But different good. I've played him for roughly 25 games and have my conclusion.... He is a beast. I expected him to be like moments Boateng that he couldnt turn. And i expected his passing to be really bad, but well i was wrong. He turns a little slower than walker or somehow varane in this game. But believe me he doesnt turn like a truck lol. He also doesn't make mistakes on build up. He has some difficulties with press after possesion loss and 8 depth because even tho he is really fast and keeps up with players with 90+ pace he still has issues with through balls. I play 5 depth balance and he is really good. His defence is really solid and pace does the job, but the main part is the EXPLOSIVE PHYSICS. Everytime he makes a tackle or interception he doesnt only get the ball, he also shoves his opponent to the ground, he can't be bodied. Defence is 9 but would actually say 9.5, its great but not maldini prime moments or Ramos like 95+

Side note: I would recon using Shadow or engine. NOTHING ELSE BELIEVE ME

Defence, every challenge were the ball is slighty in the direction of sol it is a win, his tackles never end.

Great in the air. Tall and 98 jumping, will win any header in your area and your opponents.

His physics, he is like a brick wall it is so fun to see everyone who touches him falls to the ground

Not the best dribble, but not a big problem to turn with him

Passing is not really a con, but its not a pro either, its just fine

I don't have much to say ngl, he's absolutely insane at everything defensively. Honestly what an amazing card. His defending is near perfect and he's surprisingly fast for a player with the stocky body type (high and stocky). Also mad strong. I used his loan but im considering getting his actual card.

Not a terrible price

Doesn't have his own body type

Passing could be better