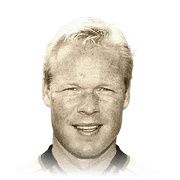 -
Sub out
Upcoming Matches
P. Chemistry
Squad chemistry
ST
80
RW
78
LW
78
CF
79
RF
79
LF
79
CAM
79
CM
84
RM
79
LM
79
CDM
86
CB
84
LB
83
LWB
83
RB
83
RWB
83
Reset
Basic
Sniper
Finisher
Deadeye
Marksman
Hawk
Artist
Architect
Powerhouse
Maestro
Engine
Sentinel
Guardian
Gladiator
Backbone
Anchor
Hunter
Catalyst
Shadow
Comments
Reviews
0
/600
Update my avatar Dos and don'ts
Top Rated
New
Controversial
Show comments
Top Reviews
Only logged in users can submit a review
A review must be written in English
At least 200 characters are required.
Compare this player to other similar players you have used(optional).
If you import your club to FUTBIN or send us an image with the player data(fill the form below) your review will be marked as verified.
Include what you liked about the player in the pros area and what you disliked about the player in the cons area.
Your review will be manually checked during the next 24 hours.
Chem Style Used
Formations
Position
Rate Player Base Stats (1-10)
Pace
5
Shooting
5
Passing
5
Dribbling
5
Defending
5
Physicality
5
Most Used In:
Submit Review

Let me start this off by saying i'm a meta whore. i always have followed the Meta, and love my Doumbia's, Rashford's and Ousmane Dembeles. I bought this card pissed after having a shit WL thinking he'd be shit, but i didnt care anymore. Boy was i wrong! i play him as the more attacking CDM in a 4-2-3-1 and he scores for fun. everyone seems to love Pogba this year, while everyone is sleeping on Koeman. you can barely feel the 67 pace and 56 agility on the defence cause he has that Icon-type tackling which bodies the opponent of 9 times out of 10. His long passing (96) is exquisite. 77 Stamina doesn't really have an effect since he already isn't the fastest, and i felt when he was on low stamina his shot power (96) still produced rocket long shots. He has embaressed my Opponent's Middle Cech recently, scoring 2 banger long shots which nestled in the roof of the net. His 67 pace can hinder his ability to get forward, but when i do the L1 + X pass to my LW (Rashford), he holds the ball for him to beat the opponent's first line of defence. from there he picks up the ball and either does a L1 + X with my Striker, from which he recieves a ball which puts him one on one with the opponent keeper (which he bangs in the top corner 9 times out of 10), or uses his 96 long pass and 93 curve to do a chip throughball to my RW ( L1 + Triangle). From set pieces he is amazing as every stat for free kicks is 95+. His corners always find my player's heads, and 96 penalties means his keeper will have a hard time saving it, even if he goes the right way.

Overall, y'all are sleeping on this card. For ~300k, look past his 67 pace and 56 agility and give him a try, i guarantee you wont regret it. You dont even have to swap with a midfielder ingame, just start him as a CDM on 6 chem.

Free Kicks (95+ on every stat related to FK)

After packing him in a base icon pack, I was obviously a little disappointed at first. Last year I took his middle card from swaps and used him at CM for hundreds of games and he was amazing (however does have +10 pace over this base version) then a bit before TOTS started I upgraded to his moments who was ridiculous. So because of this, I thought I should at least try him out, no matter how bad he looked.

After looking at his stats, I decided he was too slow to play at CB and his stamina was too low to play in CM (like I did with his other versions last fifa). This left me with one option: to play him at striker. I applied the hunter chem style and in game (I started in a 5-back to get chem) he went to right striker in a 41212 narrow, with POTM Joao Felix next to him at left striker and base Hagi behind them at CAM.

Looking at his stats, I wasn't really expecting much but thought he might be a bit of a laugh to use. However, I was very wrong, Koeman is a goal machine. At first I thought I would just try him out in a few friendlies against my mates and I was very surprised. Koeman was outscoring their Pele, Eusebio and Best who they got in their icon packs -_- . After his performance in the friendlies I decided it was time to take the next step and go into rivals with him. I am in div 1 (2050 ish skill rating) and normally do my best to avoid playing rivals as much as I can as the way people in div 1 is incredibly boring and completely unenjoyable but I wanted to see if Koeman could keep up his form against sweaty meta tryhards. Again, he was able to consistently score in the games I played which convinced me to go into champs with him up top. If I play all my games I finish gold 1 however I usually stop at gold 3 so I can turn off fut to go and play pro clubs instead lol. I finished with a record of 14-7 with Koeman getting 22 goals and 16 assists in the 21 games, not bad for a CB.

Even with a hunter, 67 pace is never going to feel blisteringly fast and you could feel that in game, especially over longer distances. Several times I would play a through ball to Koeman to be through 1-on-1 but would have to slow down and lay it off to someone else after being caught up after only a couple of touches by my opponents Varanes. However there was also a few occasions where I was able to successfully bridge past CBs on the edge of the box and although I typically like my strikers to be able to get in behind, Koemans pace was not the worst.

The highlight of this card, the fact that he is a CB and finished WL with a positive goal to game ratio shows it all. It wasn't perfect but it was very good and he buried pretty much every chance I expected him to, 77 finishing is only 1 less than Hagi and with a hunter I had no issues. The shot power is unreal and he was able to rifle them in from inside the box, edge of the box, and even outside the box too due to his insane long shots. Just like last year, his freekicks were amazing, the combination of 96 shot power, 96 freekicks and 93 curve led to him banging in a lot of freekicks for me, from edge of the box to 35 yard knuckle balls he can do it all. Also for shots inside the box the 3 star weak foot was not noticeable.

Although I didn't attempt too many difficult balls with him, his passing was very consistent and he was able to complete every pass I expected him to without making bad passes despite passing in general being terrible this year.

Not great I can't lie, however I wasn't expecting him to feel like Neymar on the ball anyway. Although he isn't super tall at 5'11, the combination of 56 agility, 70 balance and 74 dribbling really showed and meant I did give the ball away quite a lot over the course of the weekend when Koeman had the ball at his feet. 3 star skills isn't great for a striker but since I wasn't dribbling too much with him anyway it wasn't the end of the world.

I did play 1 game with him at CB and although he was slow, his defending was great and he made every tackle. This was also noticeable at ST as he was quite often able to win the ball back from CBs due to his 85 standing tackle. 90 interceptions was also noticeable when I turned on team press to prevent the opposition passing out from the back.

His strength and aggression were both really good and meant he would often be able to compete shoulder to shoulder against opposition defenders. 77 stamina was not ideal but could be worse, he would sometimes be a bit tired but I quite often kept him on for the full 90 minutes without too much problem however he would definitely need to some off if the game went to extra time.

In conclusion this card was a lot better than I thought it would be and a lot of fun to use. Obviously not what you want from the icon pack but he is better than he looks and worth a try, especially for 190k he is a bargain. I only really used him at ST but i honestly think that that is his best position as well. Thanks for reading and unlucky as I guess the only reason you would be reading this is if you packed him from the base pack lol.