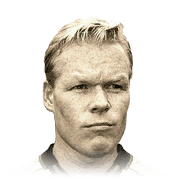 -
Sub out
Upcoming Matches
P. Chemistry
Squad chemistry
ST
84
RW
82
LW
82
CF
83
RF
83
LF
83
CAM
83
CM
88
RM
83
LM
83
CDM
90
CB
89
LB
87
LWB
87
RB
87
RWB
87
Reset
Basic
Sniper
Finisher
Deadeye
Marksman
Hawk
Artist
Architect
Powerhouse
Maestro
Engine
Sentinel
Guardian
Gladiator
Backbone
Anchor
Hunter
Catalyst
Shadow
Comments
Reviews
0
/600
Update my avatar Dos and don'ts
Top Rated
New
Controversial
Show comments
Top Reviews
Only logged in users can submit a review
A review must be written in English
At least 200 characters are required.
Compare this player to other similar players you have used(optional).
If you import your club to FUTBIN or send us an image with the player data(fill the form below) your review will be marked as verified.
Include what you liked about the player in the pros area and what you disliked about the player in the cons area.
Your review will be manually checked during the next 24 hours.
Chem Style Used
Formations
Position
Rate Player Base Stats (1-10)
Pace
5
Shooting
5
Passing
5
Dribbling
5
Defending
5
Physicality
5
Most Used In:
Submit Review

5.0
The best CDM in the game.
6 users liked this review

As soon as I saw this Koeman I thought I had to get but c'mon have u seen his stats??? He starts at CB and fits perfectly with my Erdevise right side. But in game he plays CDM but omg he is very strong defensively but that is far from all his attacking play is deadly as well. 97 long shots!! 94 curve!! He is a very unexpected player to score many goals oh but he does. With him you fill never need another set piece taker as his stats are immaculate. He is very heavy on the ball but all I do is shoot first time or play a long ball, the pace isn't a problem at all.

I did the icon swaps and selected Koeman.

At first, i tried him as CDM and I had Lampard as box to box, but I felt that Koeman could do better as CM, so I bought Gattuso Prime (the best CDM of the game for me) and put Koeman as box to box and its just amazing, he lack a bit pace but its not a big problem because he do perfect passes so you don´t need to run with him. His shooting its almost perfect, and, as I use him as CM, he shoots outside the box and make at least one goal per game. As I said, his pass its amazing. His agility its low but its not a problem if you don´t use a lot of skills. His defence its pretty good, I would not recommend using him as a CB or CDM, but his defence is perfect for a CM. His physic its very good, his energy its not perfect but its ok

Went with Koeman from swaps as last year I was pretty harshly treated by my icon packs and didn't want to take any chances. Never expected Koeman to be fast but couldn't resist with the rest of the stats on his card. I play him in cm in a 4-1-2-1-2 narrow and he's brilliant. first 5-10 games with him I was underwhelmed as I was so excited to try out his long shots/long passing that I was forcing the ball to him and trying to get into shooting positions which led to a lot of dispossessions. Once I stopped spamming him and just let him get involved in the game himself I realised how great he is. BEST long shots I've used, every finesse shot with him between 18-25 yards will either go in or certainly come close. Passing is immaculate, rarely misplaces passes and will often play inch-perfect long passes over the top. Free kicks are also best I've used, 97 FKA, 98 shot power, 94 curve, power free kick trait, how could he not. probably taken about 10 free kicks with him in scoring range and scored 6 or 7, the rest either hitting the bar or blocked on the line by defender. also takes my corners and penalties, basically a set piece master. Defending is out of this world with shadow, will intercept anything near him and tackle anyone trying to go past. Physicals are great, feels strong on the ball attacking and defending. Pace isn't terrible with shadow, acceleration not great and certainly not a fast turner but once he's going, doesn't feel too slow. Dribbling is the one downside to this card, as beforementioned, I tried to force the ball to him in early games and take it into space to shoot which didn't work at all. Pretty sluggish turning but first touch is perfectly fine so will be able to pass around the midfield with him fine.

Overall one of my favourite cards so far this year, screamers scored all the time and perfectly placed passes getting him a bunch of assists too. May try him with an engine at one point to help him feel a little more swift in his dribbling but honestly a Shadow makes him exceptional as is. Definitely recommend taking him in swaps if you have the tokens, rather than take an icon pack and get Vieri.

A bit sluggish on the ball