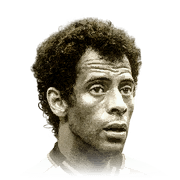 First of all this guy is absolutely insane. I used him in FIFA 20 at the end of the game and immediately thought I need this guy in FIFA 21. With some packluck I was able to buy him and I don't regret it. He is fast, strong, has a good pass and his positioning is out of this world. He can catch up pretty much every attacker, because of his pace and he also feels very agile so he can move between passing lanes and intercept the ball.

Another useful thing is his dribbling. For a centre back his dribbling is very high, so when you intercept the ball he can turn very fast and keep the ball close to his feet. This is very useful so you don't lose the ball right away.

-maybe his length, but I had no problems with that

IF YOU NEED A PERFECT DEFENDER, THIS IS THE CARD RIGHT HERE. In 30 games of Division Rivals, I got 0 losses and like 4 draws from a 1 goal lead. This guy has everything you need in a defender. His marking (or defensive awareness) is amazing and he can just run back, get the ball, and pass forward leading to a goal. I have Joe Gomez next to him and even though Joe is great, THIS GUY PICKS UP HIS MISTAKES. If you don't have the coins to get him, save up for him. He's one of those defenders that is essential to winning games (and I've tried everybody from Maldini, to Ramos, to Varane, to Van Dijk etc.) This Carlos Alberto card right now is 840k and to me that's extremely fair. I'd expect him to be 1 million by now but he's going for a steal. In the words of the great KSIOlajideBT, this guy is BEAST!

Little to none. Really I actually can't think of one thing wrong about this card.

I was not going to review this card but due to the onslaught of requests plus his previous reviews being outdated. I decided it had to be done. This guy may be small in stature but I can assure you this man packs a punch. I believe he is easily a top 5 CB this year. This guy is insanely rapid and turns on a dime, the perfect CB you could say. His positioning is perfect and you have more chance getting through me than getting through his defence. You may be sceptical about his Med/Med workrates but I will confidently say that it isn't noticeable. I won't tell you to get this card because i would prefer not come up against him in champs, but if you do decide to get this card, you have an endgame CB already, congrats. Thanks for listening to my TED talk.

-The most composed man on the game behind Bukayo Saka

-Only con here is that people are going to get him now and I'm going to have to face him in WL.