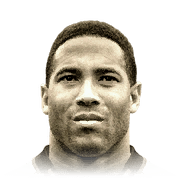 Super complete CAM. He is quite cheap for a midfielder icon this fast.

Underrated and under-utilised icon. I was on the hunt for an attacking LCM to play in 4-2-3-1 or 4-1-2-1-2 after Firmino wasn't doing enough in the position. I debated quite a few players including KDB which seemed the obvious choice but I went with Barnes.

For some context I float around 2000 skill rating. Barnes in the LCM is set to get forward and get into the box for crosses, cut backs as always are key this year and he's the man who's arriving late into the box onto the end of a lot of them. Barnes is perfect for at attacking CM role, his dribbling is fluid, passing is accurate, and he scores the chances he should due to his high composure. His acceleration tied with his strength and stocky frame means he gets away from defenders with ease.

He is pricey especially when come December when Primes come out his value will decrease but he's a difference maker in midfield and has been worth it for me.

Dont be afraid about those yellow agility and balance numbers as it totally doesnt reflect how this guy feels in game.

First ofall he is a stocky kind of build with very high strength and aggression to go with it, also has really nice dribbling and ball control stats, these kinda cancel that 77 agility and 75 balance in game but you need to use him wisely.

In the way I play in 442(2) I have CDMs as well as LB/RB on balanced, also I use 7 depth and press after bad touch, that way this defensive tactic becomes very offensive and very aggressive.

Barnes in my team works as a playmaker.

I have him with hunter chem, on stay central/false 9 instructions, that way he always comes for the ball and his great strength means he can easily shield the ball and distribute, my other striker is a typical pace-whore dream IF Rashford on get in behind, I cannot count how many goals I scored using simple one-two passes between the strikers.

Barnes although significantly slower than Rashford is still quick enough to get in behind with properly played through ball, his great set of shooting traits means he feels nearly like 5 star weak foot player, you can finesse it, you can make outside foot shoots, you can score on his weak foot as well, 90+ composure does help a lot.

His passing is great, his ability to create chances for other players is great, he is a really really good player with this years gameplay.

Even his stamina is very high and he will easily last you full games, especially if you treat him right and play as striker, not CDM or CM like some people do :)

He will also perfectly work as CAM but I feel that striker in 2 striker formation is the best as he gets more opportunities to score goals while if you use him as false 9 will very often act like CAM anyway.

It would be fantastic if EA changed his position on his prime icon moments card and make him CAM or ST as LW has so much competition this year :)

Anyway, hope I could help you, dont hesitate on getting this card, Barnes is fantasic, if I could change anything on this card I would give him 90+ jumping, 90+ heading accuracy and power header trait, then he would be complete for me :)