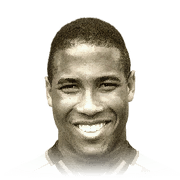 I do not review often, when I do it’s because I believe in a card, I am excited and I want others to get the same experience, John Barnes 89 is a phenomenal card and is worth you time and investment.

That said if you are a meta whore, and all you want from a LW player is pace this is not the card for you your review is over, there are better options.

If you are still here great! Gratz on liking football and playing the beautiful game to its potential, and boy oh boy will you love John Barnes.

John Barnes is the reason I love football, he was the superstar in the first ever football match I ever saw standing on the Spion Kop at Anfield, the anticipation of what would happen when Barnes got the ball from the crowd was other worldly, Barnes was the first player who in action caused the hair to stand up on my neck, in real life he was electric, in FIFA he is an absolute beast.

I have posted a link to the team my son & I tested the Barnes loan card, he managed 12 goals in 3 games, two of which were in Division Rivals 5 and 1 in squad battles on legendary difficulty as I wanted to see how he would hold up vs perfect AI defending and constant pressure. Defense opponents were META defense and featured in all games Allison, Varane, Mendy, Gomez and Walker/Tavernier and Courtois once.

We converted Barnes loan to LF and slapped an engine on him for the extra dribbling and pace boost with a limited game sample to try him we wanted to see his best and judging by what we found on youtube engine seemed to be optimal choice, will also try Hunter later when we get the card for real.

Formation started as a 4-2-2-2 switching to 4-2-3-1 (2), Barnes in second striker role was partnered with Rush (87) and in second formation as central CAM behind Rush with RTTF Wijnaldum and Griezmann’s 87 supporting. We will play Barnes centrally and see him as a longterm CAM solution or 2nd striker option.

Barnes in game is a real presence, he is quick, feels good on the ball, his passing is precise over short and long distances and his shooting is elite, he will find the net inside & outside the box, his goals we’re all different from cut in finesse on right foot, pile drivers, flip and volley’s, free kicks into top corners, low drive, outside of the foot placements – he can do it all, he is quick enough to skill anyone and has the physicals to hold of the best defenders. Composure is a standout 90 on the card as base stats and reflects in game he is ice in front of goal. 87 positioning was fine he makes good runs in and around the box and always found space to receive the ball and make an effective move.

Barnes SBC would be a big investment for our team so the biggest question we had is does he improve our team and the answer is a definitive yes, he is a great option on the pitch and be a fantastic play maker who surrounded with good players will contribute on the score sheet. Barnes has high attacking work rates and medium defensive work rates but with 82 aggression is very proactive out of possession and will press and win the ball back high up the pitch when needed, he certainly plays for the badge and did not go missing in any matches.

If you support Watford, Liverpool, Newcastle, Charlton or England, get this card, if you want a fun card who will score fantastic goals and make amazing passes he is worth your coin.

Shooting - he can do it all, with finesse, flair and outside the foot traits we can and does score from anywhere with either foot short or from distance

Passing - on point, precise, defense breaking Barnes doesn't give it away and has great vision and playmaking to make the killer ball or keep possession moving. He did not get many assists in our trial as we were having too much fun scoring!

Physical - he is strong, hard to knock of the ball and keeps possession when under pressure

Composure - he will make the play under pressure

Aggression & Presence - he plays for the badge

I used this card in Fifa 20 with a Marksman and he was really good. With EA changing the marksman Chem Style, I went for an Engine to improve his Pace, the passing and his dribbling.

Really really fast. We are not talking about a Mbappe level, but he definitely has a decent amount of pace ingame.

You can argue to slap a Hunter or Finisher on him, but even without a Chem Style boost his shooting was good. Not to a whole new level, but still very decent. And you know what? He got both shooting traits, which is a huge W.

For a striker amazing! His short passing is extremely consistent and his long passing is decent as well. With Engine you can play him as a CAM as well.

I can imagine that this is the Stat a lot of people are looking at because of his height and Balance. That's the reason I went for an Engine btw. And I have to say, he felt amazing on the ball. Obviously he can't be compared to a Neymar type of player, but still very very good.

The combination of Pace and strength is simply good. He can challenge the Mendy's and Adama's in that wing position, but also a lot of CB's with decent strength. His Stamina did last for the whole 90 minutes as well.

All in all: He's got everything you want! Pace, shooting, dribbling and passing. BUT: None of them is really "endgame". Nevertheless it's still a great card.

- SBC? No. Maybe if you have half of his price as fodder. Then go for him.

First of all, i created a futbin account just for writing this review.

I never thought i could get near elite in fifa 21(because of all the rats in this game), but this man made my dream come true last weekend.

When you are through on goal with this beast, make sure to fire the cannon nearpost, even if pope is already licking the nearpost he wont stand a chance, because i promise you, that Johns nearpost cannon is the most satisfying thing, you will ever experience and the closest most of you will ever come to a sexual experience.

He doesnt fit the meta and he wont turn in a split second, but if you choose to use him correctly, you will fall in love with this man.

This SBC is a hidden gem and can be done with red players instead of in-forms, a very cheap gamechanger! You can ask every opponent i have met in the last 2 weekends, and if any of you are having trauma from meeting my barnes in champs, i am so sry.

I wont write anything here, cause it would be disrespectful to this legend