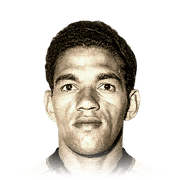 Hey everyone! I know you probably won't want to read thru a whole wall of text, so I'll keep this short and sweet. If you have zero time, just read the Pros and Cons

He's OP! I used the Finisher chem on him - 90 pace is enough for me, and I wanted to boost his shooting and, most importantly, max out his dribbling. Depending on your style of play you can try Hunter or even Deadeye.

He is best compared to 96 Sancho, 94 Messi and 91 Ronaldinho (FIFA 20). I haven't used anyone similar to him this year, I think Messi came the closest but he's been unfortunately nerfed in 21.

And to conclude the review, I'm going to talk about something unique to Garrincha. I have never seen someone with the ingame dribbling style of Garrincha. It's amazing. I know some people think his physical is terrible and unusable, but I found that ingame he's really hard to knock off, even by all the meta CBs. You kinda have you use him to know what I mean.

Thanks for reading and hope this helped!

I got to say he's insane.

First of all, the Lad has this lightening speed that make every defender look like Bartra against Bale.

He's so efficient in front of the goal he ain't missing anything on the right foot and he's also got a solid left. Even though he "only" has 86 curve he finesses everything top bin even from outside the box.

Now here is the most interesting part. This dude has the Jinga in him. He makes the pitch look like a dance floor. Every defender are at his feet and slide everywhere as I used to to in snow class.

The passing is very good, very well rounded. Special mention for his cross are lethal.

Who cares about defending, it's Garrincha.

Manuel has a good stamina and can be played for 120min, BUT he's weak as Valbuena so try to avoid contact with big guys like Virgil or Sergio.

I packed Garrincha with my first base icon pack. Great player in the first games but after a while the player that costs 1.6 mil did not do his job like he used to. I played him with the chemastrystile hawk. it seemed logical to me because i wanted to give him some extra strenght. Now i know i should just have givven him a hunter card and it would be fine! Didn't i know it would make such a diffirence! It was like the world turned upside down. With the hunter card garrincha was reborn and i was happy again because i could use my 1.6 mil player again.

I play a lot of frienlies so don't mind the games that ive played with him. If i calculate is all, it would be around 300 games.

Pace - He is very fast. Put a Hunter card on him and he is gone. I played him at striker and he just outran everyone.

Att positioning - He is always ready to go. I like to send my players forward and just pass the ball past the defenders. He knows where he needs to stand to pass to.

Dribbling - Of all his statts, his dribbling is the best. I'm not a very good skiller, so his 5 starr skillmoves are a bit wasted on me but even without skillmoves can he provide you with amazing dribbling skills. Left stick only and he's amazing

Shooting - He plays with hunter in my team. After everyone said that he would be SO good ad finishing everything you might expect to much. He does not finish everything and he does not have much shot power either. If youre a long range shooter, Garrincha might not be the player for you. With his 78 Long shots he doesnt come close with my Kulusevski (94) and Bergwijn (91). I like my longshots but he is just not the one to do those with.

Workrate - His workrate is medium/low, this isn't something that makes such a diffirence for me but it is a minor point.

Strenght - With his 64 strenght you shouldn't go up against any strong defender. And with stron i mean any defender with 80 or more physical.