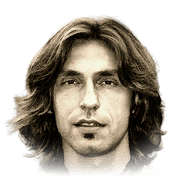 Where to start.. Going into FIFA 21 I knew I had 2 goals. Get Pirlo and get Dinho. Before the game was out worldwide, I had achieved one of them. Pirlo was mine.

I was thinking of using him as a RCM in 433(5) which I was using when I bought him, but I figured it wouldn't do him justice. I switched to a 352 which he is using with Juve himself, and put him behind Douglas Costa and Suarez. Right away I noticed his presence on the pitch, we all know how majestic he was in real life. It's the same in FIFA. With an engine he gets 91 agility, 97 balance and 99 dribbling. He also gets 99 vision, curve, crossing and short passing along with 98 short passing. Mix this with his already insane base stats and you have one of the best cams in the game.

All games were played in Division 2 rivals.

His passing is everything you want it to be and more. He rarely misplaces passes and picks out ones you didn't even know were possible to make.

Like I mentioned above he has 99 curve. With that 99 curve crazy crazy finesse shots come. He is also clinical in front of goal.

Something that surprised me was his long shots and close range shots struck with power. He only has 77 finishing but after only 10 games he has scored some bangers.

He has 90+ in everything when it comes to dribbling. It is almost impossible to take the ball from him.

He "only" has 87 attack positioning but it feels a lot higher. Always in the right spot and making the right runs.

He has 94 composure which I guess could be a factor. But he always comes up big. I have only used him for 10 games but he has already scored or set up late winners or equalizers in

For a a cam that is set to stay forward, 84 is stamina is more than enough at this part of the game. I have only used him in 90 minute games though.

There really only is one con and that is the lack of speed and physicality. But I knew that going in to it. And you aren't going to be using Pirlo to pace through defenses. He still isn't slow, 80

pace with an engine is more than enough for me.

Usually, even when a player is supposed to have very very high passing stats, i don't really notice it, but Pirlo is an exception, I already played 15 matches with him and his passing is incredible. If he misses one, it's because I screwed up myself with the timing or the positioning.

Also i play him CAM with hunter (really wanted to improve his pace, but also to score some goal when he has the opportunity, and I an say that he dibbles very well, no need to increase it (as is pace is slow, I prefer increase pace than dribbling) and with this hunter he has a very correct pace.

He scored some goals from me, I won't say it's his biggest asset, but he is also very well in it (maybe thanks to the hunter chemstyle).

His positioning is also very good.

I bought him 545K when he was kinda panic sold, I don't thing he deserve to go under this level, as he is 5 stars skills, 4 stars weak foot.

For me he may be the best cam I used this year. I absolutely advise you to give him a try.

Defending : we don't care but he was very useful for me in some situation so I can put a 6/10

Strenght: Don't expect him to bodybag Akinfewa, but he is correct in this area

Stamina is not a problem for me, he get a bit tired at the end of the match but he will finish it brilliantly, just put a stay forward instruction to give him some breathe

I would love that they increased his shooting stats, just have a look at his best career moments, the guy was scoring bangers and crazy free kick, for me he deserves better stats in this area, but whatever he still has good stats to shoot