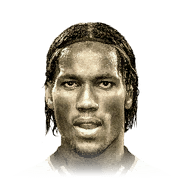 Confirmation Bias is one of the terms in Psychology that has always interested me when I have had the chance to come across it.  The idea is that we all have ideas and biases about different topics and when faced with information that confirms what we already believe, that we then place a lot of weight on the importance of that information.  When the information goes against what we already think we will do whatever we can to discredit that information.  Understanding confirmation bias has allowed me in my everyday life to be more aware and open minded about what I think is right… but in the case of 87 Base Drogba, I fell victim to my own ideas about this card from the beginning…  and it really wasn’t until the weekend ended that I came to grips with my mistake.  From the moment I packed Drogba in the Base/Mid ICON pack, I was a little disappointed.  600k meant I just about made my coins back and realistically there are A LOT of worse options… but we all still dream of that card that will change our squad and make it worth the grind to finish the SBC in the first place.  In my mind, Drogba was a small W but in general, I would be held back by a lack of pace and a clunky feel associated with his 189cm|6’2 build.  In light of these issues, I went with the HUNTER chemistry style (also tried FINISHER & ENGINE, but nothing felt as good as HUNTER) and set Drogba loose on the opposition as the ST in my newly adopted 4-2-3-1 formation. Drogba stood tall as the lone warrior up top all weekend in the following squad: 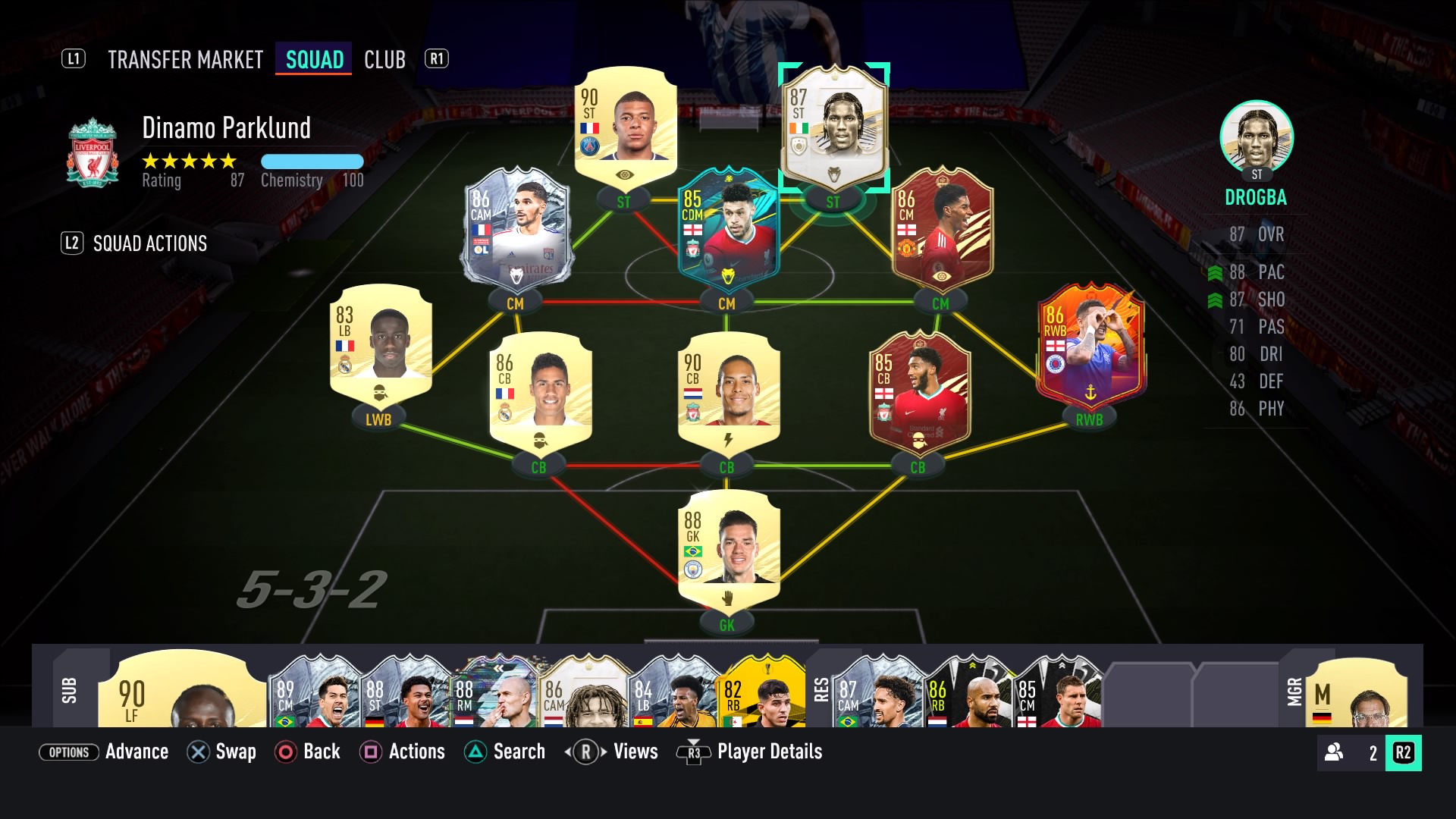 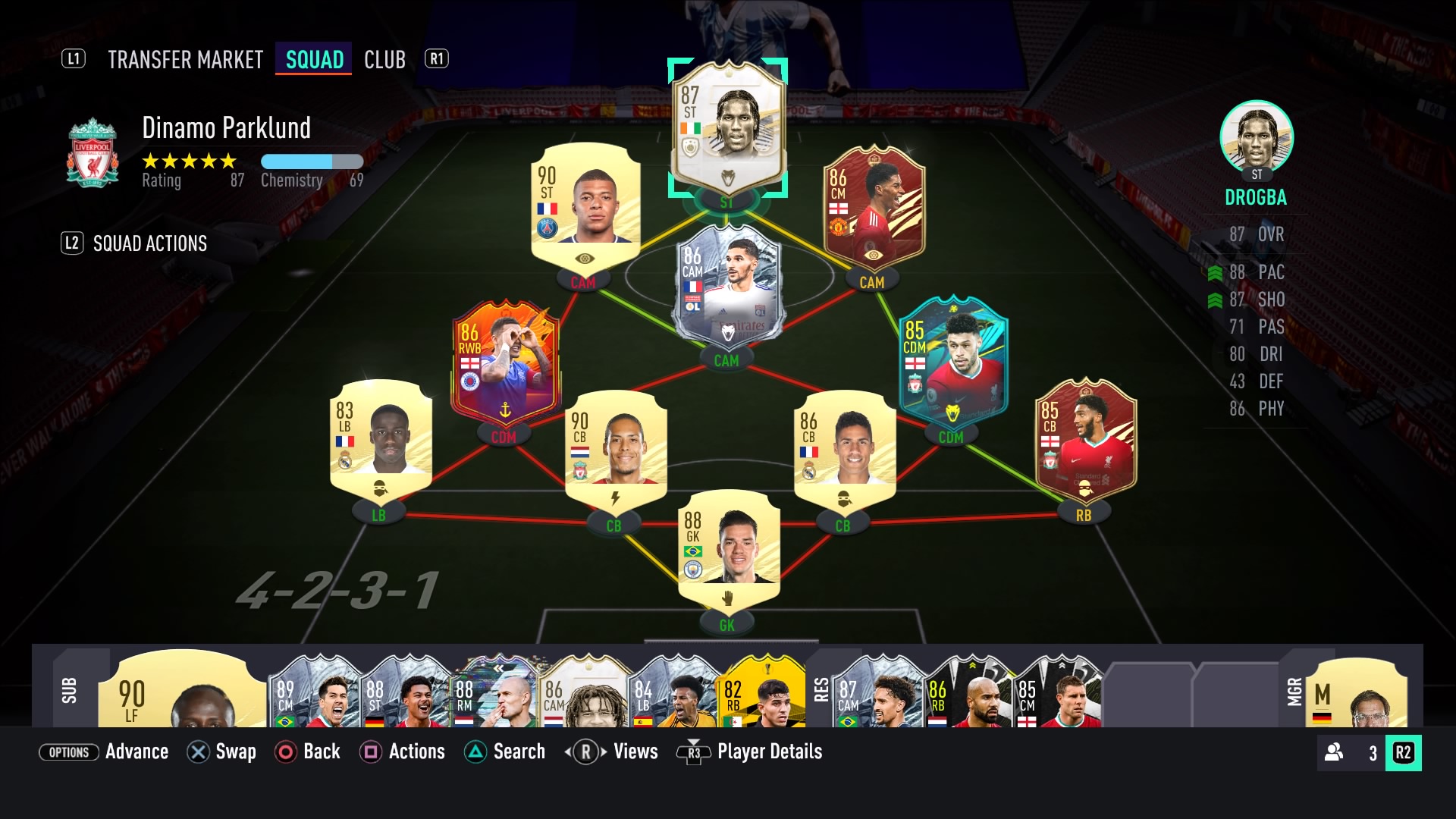 I was positive Drogba would be slow.  I picked out every race he lost, scrutinized his speed in poor gameplay and generally couldn’t wait for my review to end so that I could finally replace the Côte d'Ivoire frontman.  But, then around game 15 of the review, Drogba put together a 4 goal performance in a closely contested 4-3 win and I started to get my head out of the sand with this card.  Watching back over the goals from previous matches and paying closer attention to the opposition made me soon realize that the 99 ACCELERATION & 97 SPRINT SPEED was performing accurately with this card from the start.  This card is quite quick and really makes Drogba a force in the central positions, capable of breaking down opponents and stretching back lines with his top-end speed.  And while my opinion on his Pace was proven way wrong, my early thoughts on his Dribbling never changed… but I will wait to discuss that further into the review.

There was no bias, no misconception and no surprises when it came to the shooting with this card.  Drogba was a clinical striker in his day and this certainly carried over to his pixelated version throughout the weekend.  99 FINISHING, 94 SHOT POWER, 82 LONG SHOTS & 99 VOLLEYS appear to be cracked statistics on first look and thankfully they translated into quality finishes in-game.  All in all, I wished Drogba would have contributed more than just the 21 goals in 20 matches during the review… but it was through no fault of his finishing that he did not exceed my expectations.  The 4 STAR WEAK FOOT is also a nice addition with this card but did not blow me away throughout the review… in fact, it may have even underperformed a little for my liking.  All in all, though I always appreciate a striker who takes their chances when they find their way into my squad and Drogba definitely delivered in that sense… he even has a cheeky free-kick goal in him from time to time.

This card dominates the air like a 189cm|6’2  striker should… honestly I have not had a card come close to this level of air superiority.  Drogba’s size is aided by his 88 JUMPING & 89 HEADING ACCURACY, and when combined with the Power Header trait makes for one dangerous option in the box.  Drogba contributed a nice return of header goals throughout the weekend and honestly, I should have put a few more crosses into the box watching back over the highlights.  In general, the past two years have programmed my thought process to avoid a simple lobbed cross… but I really should have embraced it for this review and see where Drogba’s air prowess could take me.  Obviously, the size of this card is also a huge factor in the Physical rating while 91 STRENGTH is not hurting his review results either.  The card is a juggernaut… that can not be denied.  The only issue with all of this size fueled domination is the negative effects experienced when trying to maneuver the big man in tight spaces.  The left stick agility with this card is borderline non-existent and turning feels everything but smooth.  While it definitely holds Drogba back, it is most likely the reason that this card is not over a million coins on the market.  If I picture this card, with high agility, it is a truly scary proposition.

600k is on the absolute borderline of what I would pay for this card.  For me, 500k is more appropriate but looking at the options in this price range maybe I am wrong?  It just feels like the lack of “METAness” about this card means that it should be discounted further.   I am actually open to debate on this one, but I just can’t imagine buying this card for 600k on the market.

I covered the Pace that was actually there when I thought it wasn’t… the Dribbling that was not there when I knew it wouldn't be… that Shooting that we all knew would be there and delivered… and the Physical statistics that had to be there or we riot… which only leaves the Passing conversation.  With only 5 assists in 20 matches, it is clear that Droba is not a wizard at finding teammates in the tight spaces Drop Back Danny creates in the final third.  Yes, as a lone striker I wouldn’t expect a crazy return… but only 5 assists is a sad state of affairs for a starting striker across 20 matches.  71 SHORT PASSING & 61 LONG PASSING kind of speak for themselves… and with a change in chemistry styles, it was really no different.

Surprisingly Good.  The best comment I can think of to summarize this card.  Drogba was a nice reminder for me that there is still a way out of the META if you want it.  I hear the arguments (and make them myself all the time), that for instance if I had 91 Mane (a 500k card) up top I would have scored more goals and therefore won more matches… but that is not 100% true.  Drogba scored in matches from corners where I otherwise struggled to find any way through my opponent… providing an alternative to the normal avenues we take to score in FIFA 21.  Yet, as I sit here trying to articulate why a non-META option like Drogba can still earn his place in your squads… I am stuck facing the undeniable problem that without agility it is a hard sell for any striker in FIFA 21.  My heart tells me, “ya, you should all give this card a serious try and explore a different way of playing”... but my mind tells me, “sadly, you should avoid this one in the end, there are better performing options for a much cheaper price.” Sad but true.  Hoping you are all safe and well.  Cheers for reading. 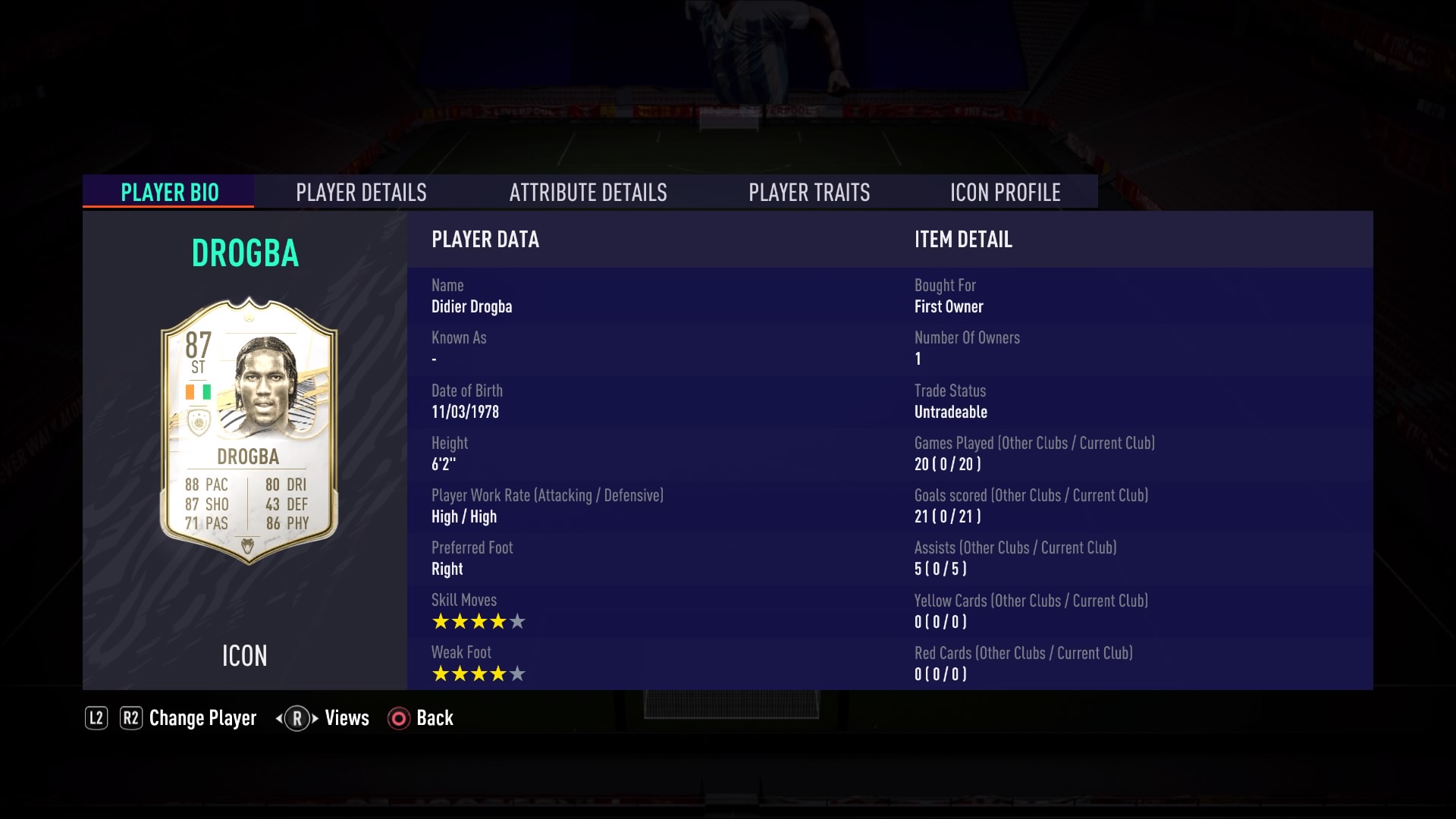 I got him out of my Base Icon SBC and was pretty happy to not see the Danish Flag (no offense). As mentioned in the title, Drogba definitely isn't meta in my opinion. He just lacks the dribbling, especially Agility and Balance. BUT he just finishes everything in front of goal. His shooting just feels phenomenal and Pace combined with his 91 strength is definitely enough to outrun most defenders. Another thing that just stood out is heading. I mean this guy is already 1,89 m (6'2") and still he got 88 jumping paired with 89 heading. Great for Crosses and Corners. I tried Engine and Finisher on him to try and counter his lack of Agility/Balance and found Finisher to be my preferred Chem. Style for him. I feel like there are most likely better Players out there for similar money, but going off Meta is just a lot more interesting and fun for me (that being said, i still use Varane. Some Players are Meta for a reason I guess).

Hi. I packed him from my base icon pack and after first games I was very disappointed, beacuse he was clunky and annoying.

After playing 50 games with him I have to say he is one of better strikers I have used this year.

Use him in 2 st formation alongside some agile player like Werner, Rashford etc.

Very nice card overall, but a bit expensive. I will save for his better cards, beacuse I liked him : ).

I decided I wanted a striker that had some physicality to them, that could go up against big centrebacks and dominate them, I particularly wanted them to be strong in the air as well just so I had more ways to score.

I chose the 87 version because he had more agility and pace which would allow me to turn and just be quicker, in general, to go with the strong physical stats. I play him in a 4-3-3 and make sure he is on stay forward and to make runs in behind. I have two wingers with decent crossing attributes so I can feed him if I get down the channels. There is something about this card that just finds ways to get into space and beat a defender to the header even when it doesn't look like it's going to happen. You cross a ball in and it looks like it's not going to beat the defender and he manages to leap and latch onto it and head it with a lot of force.

If you want to play him in with his runs in behind then he does that perfectly as well, he has great attack positioning and makes those runs, and has incredible pace to beat most defenders in this game. On top of that, he is incredibly strong so he is like a train once he's in. The finishing is superb as well with the 4* weak foot meaning he can pretty much score on either side comfortably. I scored two free-kicks in ten games with him despite the free-kick stat not being incredibly high. Long shots felt fairly strong as well.

He will also give you support on defence, for example defending corners he is going to save you a lot of the time.

This is the best card I have used this FIFA so much that I felt the need to write a review on it. I have chopped and changed my team a lot and tried different Icons, but this one is just incredibly fun and strong. If you're looking for a striker that is going to get you goals from all kinds of positions and bully some centre-halves then I would highly recommend this card.

Dribbling - Even then it's not really that bad