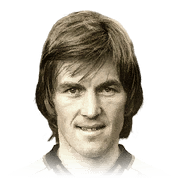 I was surprised to see that no one has reviewed Prime Dalglish yet, so decided to give you my opinion on him.

After playing with a first owner squad until the end of December, I had 2.5 million coins saved up and wanted to try a big big striker. Doubted between Mid Eto'o, Mid Puskas and Prime Fernando Torres, but eventually decided to go with King Kenny (no regrets). He slotted right into my team which is linked (this is in-game, I get full chem out of it), applied a hunter chem style and started banging goals in.

Immediately from the start you notice that there is something special about this guy. He isn't tall or strong, but has a way of running and dribbling that just glitches him through defenders. I have now played 20 WL games with him, and I've already lost count at the amount of times he just glides past defenders. Step-overs are truly broken with him, and I don't need to tell you that he finishes easily with both feet.

In the 20 WL games he now has 39 goals and 13 assists. That is mostly due to his positioning in front of goal. He is always in the right spot to make an easy goal, but scores the harder ones without breaking a sweat as well. His runs are out of this world, and he has got plenty of pace to leave Varane and Gomez in the dust.

This guy is by far the best striker I've played with this year and maybe even in every Fifa ever. If you have the coins for such a player, don't think twice: Dalglitch wins you games.

price 2 mil is a lot of coins

Hi guys, I must tell you that I packed this guy in an untreadable rare electrum players pack. I immediately send him into my starting XI and I was buzzing to play with this monument of British Football. He is insane!!! When there are good gameplay conditions he becomes even stronger. he's very smooth on the ball and the 5 star-weak foot makes him unpredictable. But I found something that could be a little problem to this card, when he shoots he kicks the ball in a way that can' t give any effect to the ball and the shot is completely straight. if you match goalkeepers with good positioning it could be a problem because the gk could block the shot easily due to shot trajectory. Anyway, apart from this he is fantastic, amazing shot power good short passing and perfect workrates.