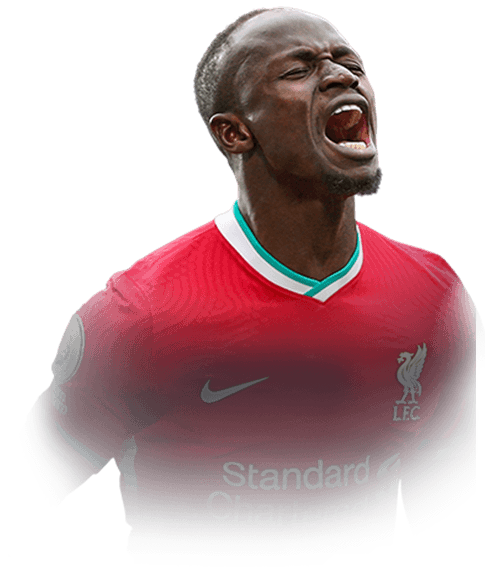 His real-life stats are currently 3 goals and 0 assists in 7 matches in domestic competition. He also received 1 yellow cards and 0 red cards.

I normally never write reviews or post squads onto FUTBIN but after using this card, I thought it would be an absolute shame if people didn’t know how good of a card this is. Last year I was fortunate enough to pack Mane’s TOTY card and was majorly disappointed and all I could say was that he felt like a fraud. So when I packed him this year I had my doubts. He sure as hell silenced me though.

I’ll admit the first couple of games were a bit underwhelming but changing formations to a 4-2-3-1 having him as the lone striker changed everything. The second I’d send a through ball it was almost like I knew I was going to score. He would blitz past defenders like Varane, Gomez, Van Dijk, and several others. He was surprisingly great in the air and would score me several headers from direct corners. Hell, he even scored me a couple of freekicks with his 66 FK stats. Every game he’d just get better and better and would run the whole show by himself. The 4-star weak foot is misleading, he would score long shots with his weaker side and it felt as if it was a 5 star. Passing was great for a striker and he could even be used as a CAM.

Overall, this card is simply unreal and if you can somehow pick him up you won't be disappointed.

This is the first time I am ever writing a review about a player but like the person below me, others should know how amazing this guy is. I was hesitant to spend this many coins (2.2mil) on a single player, but he transformed my whole team, and I knew I was going to enjoy him after using his great normal card. His runs are unbelievable and he can penetrate through any defense. Ive used STs such as Ronaldo, Mbappe, 90 Dalglish, RB Kane, baby Etoo, baby Torres, baby Suker, mid Crespo etc. He cannot be compared to any of these guys. I would highly recommend Mane Freeze to anyone with the coins, he is an absolute game changer and the most fun player I have ever used in my 12 years of playing FIFA.

Pace: makes amazing runs and will easily outpace defenders such as Gomez, Varane.

Shooting: he can shoot from almost anywhere, even if he doesnt score youll get a corner which will allow you to have another chance with his amazing heading.

Heading: as mentioned, his heading is GOATed for his size. I was extremely surprised with this as he is not the biggest or tallest ST. From 65 goals, about 12-13 of them have been with headers and I barely play with crosses. One game he scored a hat trick for me just by heading in corners.

Dribbling: is as expected, i dont abuse dribbling and prefer linear runs but whenever needed, his dribbiling does the job, great agility and ball control.

Stamina: he will not even feel tired in extra time.

Physical: often steals the ball off defenders and can push them off with L2 many times, even against very strong CBs.

Well, after dozens of games with him (using hawk) I can say that he is one of the best players in this game.

His agility is amazing. this dribble is insane. The ball just stuck to his leg. And his finishing.... you can shoot from anywhere. Just try and find that you can do almost anything with him.

In short, the reason I am writing this comment is for those of you who are asking whether to buy him or someone else.

its true, there are a lot of great strikers in the game other than Mane, but I highly recommend you to try him. he is something else.

Try and understand by yourself! good luck guys

height (Although it's not much disturbing)

sometimes his passing is Inaccurate

I recently built up a nice amount of coin and decided to send a large amount of a good player. After looking over my options, I decided to send 1.7 mil on this Mane. I had high hopes for this card as after I slapped a hawk on him, he had 99 Shot power, 99 finishing, 98 pace, and 96 agility. I started him off in a 4-5-1 just to get full chem, but shifted to a 4-4-2 to start the game as him up top next to moments memfish depay. After using for him 12 games; 8 rivals and 4 squad battles, I found out that this card was super fun to play with. He broke on some runs faster than a Mbappe and a TOTW Rashford and had the agility of a Neymar on certain skill moves. When he tried to, he would always get behind the defense on his runs and had enough strength to shield off the ball on contested runs. The issue was if he decided to run. I found myself begging him to run and spamming LB (on Xbox) to make him go forward. I even had times where my Freeze Aouar would make runs past him even though he was playing in the midfield. When Saido did decide he wanted to try though, he also did not always finish. His 99 shot power sometimes felt like a rocket, but also sometimes felt like a ground ball to the keeper. He sometimes buried it top corner, but also sometimes yanked it wide right from inside the box. He felt great on the ball and sometimes had glimpses of a game-changer, but other times made me disappointed. He is a fun card to use, but not at a 1.7 mil price tag.

Once he gets the ball, he is electric with it. The dribbling and sheer pace of this card were everything I could have asked for and more. He was very hard to dispossess of in both squad battles and rivals, and his heel-to-heel skill move gave him a speed boost that got past most defenders easily. He never got tired in any of the games I played even when I had him come back on defense and always get in behind. He truly is a sprint god and maybe one of them if not the best player when physically on the ball that I used so far in FIFA 21.

The two cons I have for this card is really his consistency and the price. It seemed that Sadio got behind the defense only when he felt like getting behind the defense. There were numerous occasions where I was screaming at my TV for Sadio to go and he just stood there staring at me. When he did decide to go even if I had to hold down LB to trigger the run, he was gone, but it seemed those times did not happen enough. He was also somewhat inconsistent in his shooting. Some shots were bullets that would not have been saved by any keeper in the games. Other shots were practice balls right next to the keeper or way off the net that made a bronze look like Neuer. With those things being said, I think he is not worth his price. After rising him, I would be more comfortable spending 1 mil to 1.2 mil on this card. It just seemed like there are better and more consistent options at the striking position than this.

Packed this guy from 83+ x25, wasn't even surprised because I barely play the game but have insane pack luck ( got ucl mbappe + van dijk from rare electrum, freeze silva from 80+ player pick, Lampard and Alisson from rare players pack, and Headliners benzema from 81+. Anyway, this card gives you a free goal if you press shoot anywhere inside the box, even if he's facing the other way. Dribbling is insane but should feel a lot better if you look at his stats. Only problem is his positioning. Feels like 77 not 97. Even if you play him on stay forward get in behind, he always seems to drop off during counter attacks