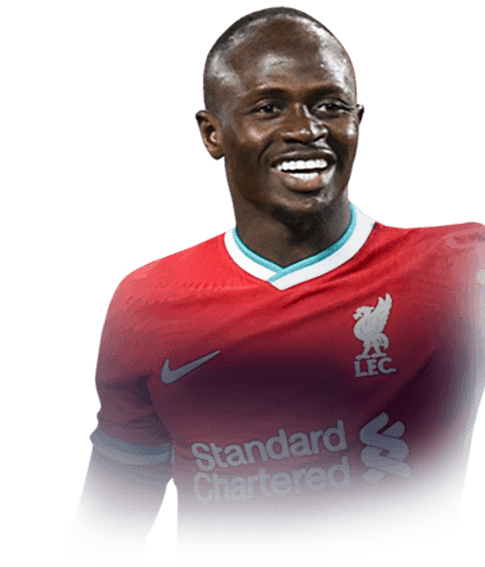 His real-life stats are currently 3 goals and 0 assists in 7 matches in domestic competition. He also received 1 yellow cards and 0 red cards.

Where is Thomas Müller?  Seriously? If there was a TOTY Honorable Mention that was worthy of a card it was certainly the Bayern man.  I just had to get this out of the way… but I digress, back onto the matter at hand.  Sadio Mané was certainly not a controversial addition to the Honorable Mentions coming off the back of a season where he played a major role in Liverpool’s return to glory.  The all-action speedster has caused many a right-back nightmares in the past few seasons and continues to be an ever-present handful.  From a FUT perspective, it is clear that a lot of the qualities that make Mané so effective in real life have transferred over perfectly to his digital version.  Since the start of FUT I have utilized a non-tradeable version of the Senegalese star with excellent effect… often reverting back to teams with him involved for the final 10 matches after my reviews conclude.  In truth, I wanted to review Mané’s FUT Freeze many moons ago but it wasn’t in the cards that time around.  Spoiler alert… the FUT Freeze is absolutely insane and this card has even better statistics.  After applying the FINISHER chemistry style this card starts to look like a terrifying specimen, and Mané terrorized my opponents as the frontman in my 4-2-3-1 formation all weekend in the following squad: 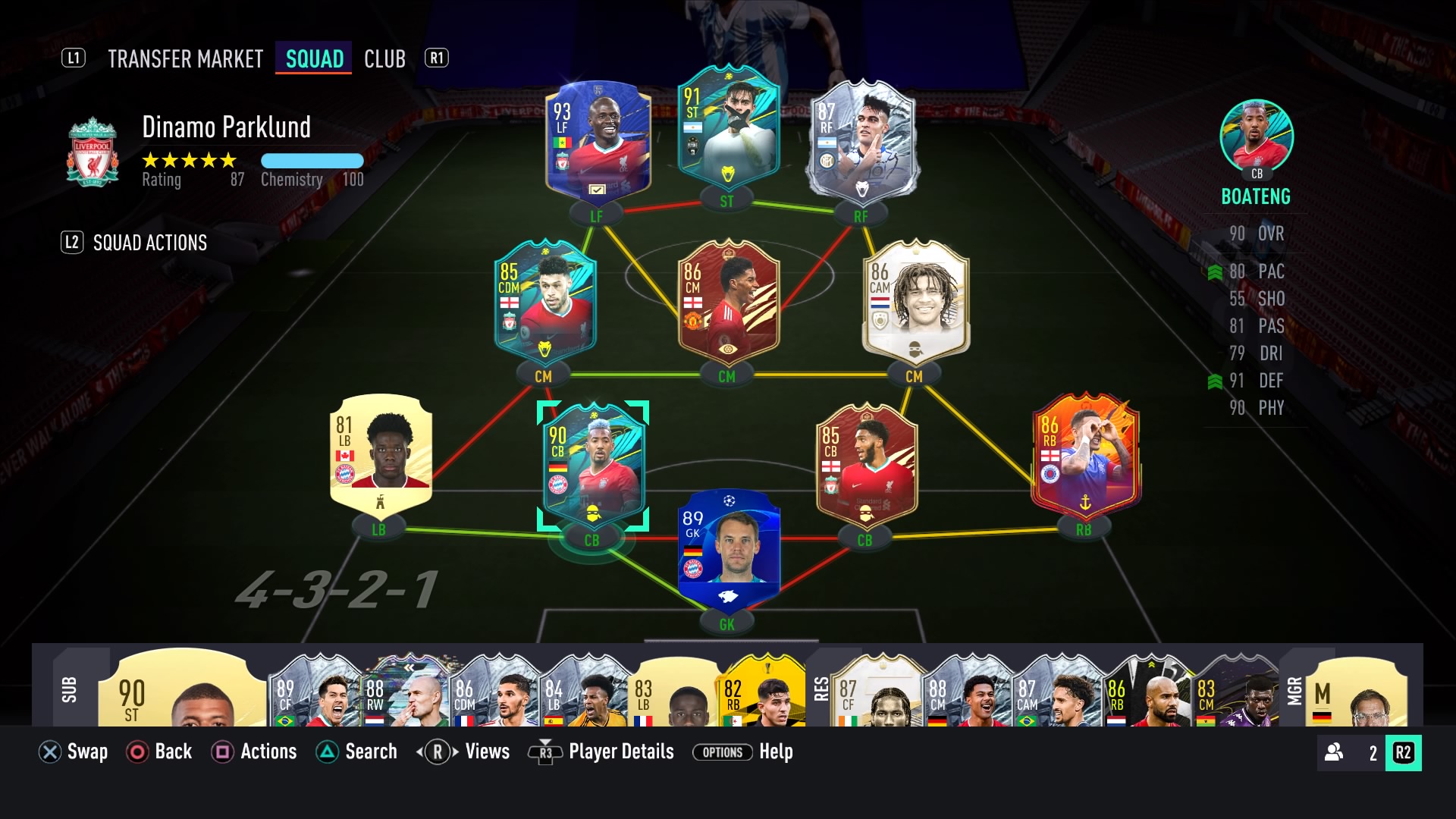 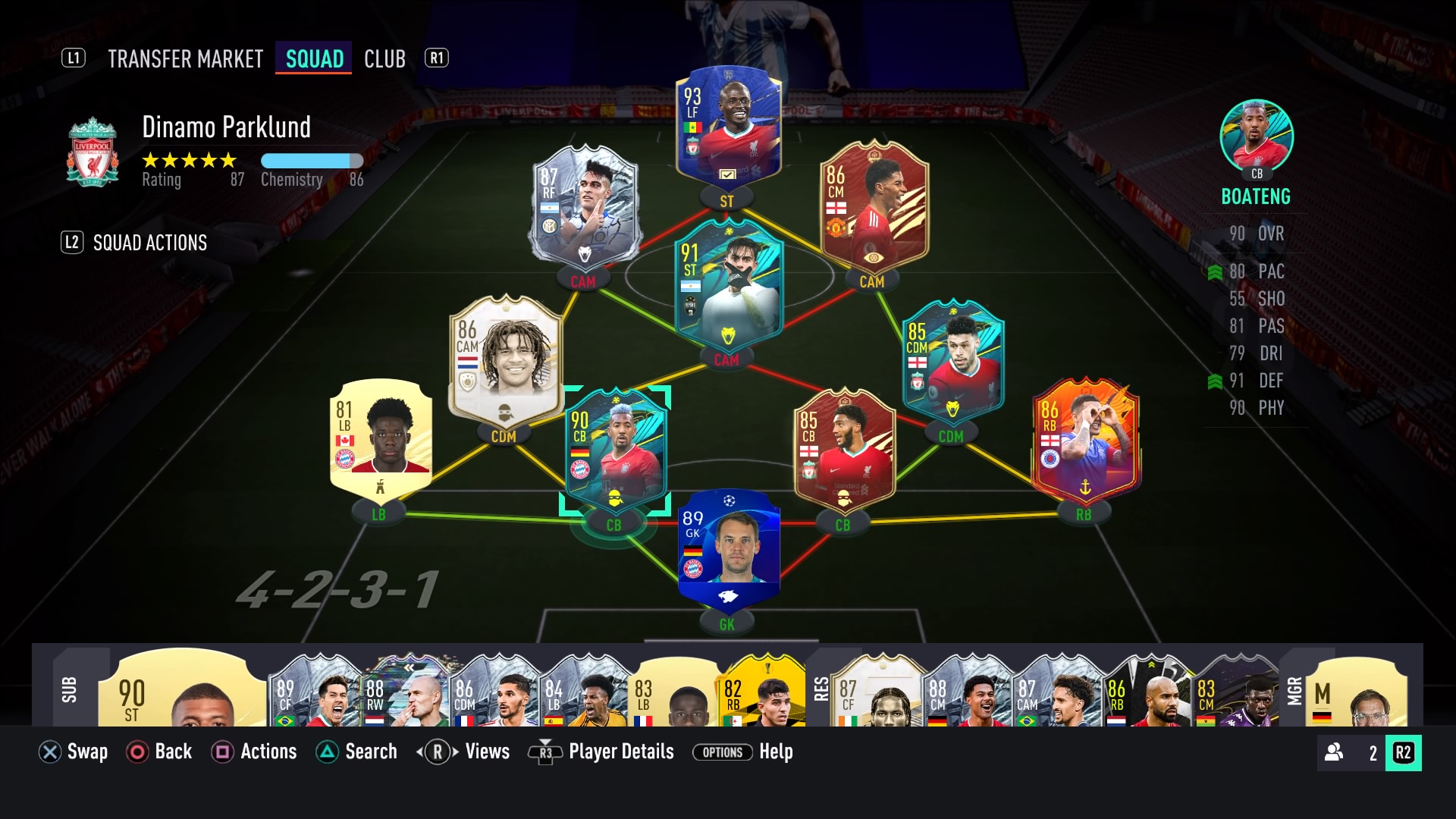 I honestly had a terrible end to my weekend.  If you follow me on Twitter: @IVIaeNine or read my Boateng SBC review you would know that with a 14-1 start everything was going exactly to plan early on in the weekend.  Unfortunately, the game I signed into Sunday night was nowhere near resembling anything close to FIFA.  The final 5 matches of this review included a D/C (hence the 21 matches), 3 matches in pens, and the other two in extra time.  The scores of those matches were all 2-2 or lower and in general everything about the game was in the mud.  With that in mind, I am more so looking at Mane’s returns in the first 15 matches as opposed to the 15 matches that followed.  For the record, I finished with a disappointing 20 wins in the end.  So, in 15 matches Mané amassed 24 goals and 6 assists… still not exactly what I would have hoped going into the review, but much better than the image suggests.

With 98 ACCELERATION & 96 SPRINT SPEED, it is no surprise that this card is absolutely rapid.  Through balls take on an entirely different meaning when utilizing a player that is this quick and this fast.  In general, my opponents struggled to keep up with the movement and certainly could not contain Mané in a dead sprint.  The thing that is most enjoyable is the fact that you hardly notice a difference between Mané’s pace with or without the ball… the card is lightning fast at all times and is a key part of everything he does well.

Obviously, if you are going to choose an attacking combo it would be one more star in each category… but this is as close as it gets in terms of performance.  When you take Mané’s blistering Pace and add the 99 AGILITY & 94 BALANCE… then sprinkle in 92 BALL CONTROL & 99 DRIBBLING you get some incredibly responsive and “slingshot” dribbling.  Mané simply floats back away from defenders with only a left stick dribble… and can then fire forward with fantastic speed, made even more effective when a bridge dribble is mixed in.  This card is a treat on the ball and anything resembling good gameplay can create a ton of chances just by himself.

The Shooting statistics with this card are just as impressive with the trifecta of 99 POSITIONING, FINISHING & SHOT POWER.  Of course the 4 STAR WEAK FOOT is just as important as Mané fires the ball with a 5 STAR WEAK FOOT feel on his left… but not always 5 STAR finishing.  That would be the main reason I went for a 9/10 as Mané did miss a chance or five that I know he would have buried on his right.  In general, the card feels dangerous and clinical… but small moments kept me from going any higher with the ratings.  If you do buy him... be aware that not all chances are rewarded.

2 million coins.  When you take a look at the 92 rated FUT Freeze Mané at 2.1 million coins in a central ST position, then the 2 million coins for 93 Mane at LW seems about right.  So why the 4.5/5 for value?  For me, FUT Freeze Mané has always seemed like a card victimized by low supply.  There never seems to be any on the market (currently only 12 as of this writing) and therefore has driven the price to dizzying heights.  However, with two pages of Honorable Mention Mané, I did expect this card to settle at a lower price… but with better statistics than the 92 it feels like the two are connected in terms of price tag and in the end those price tags just feel a tad bit high.

Pace, Shooting, Dribbling: Check… Physical?  Again, Mané delivers a quality rating in the Physical statistics with a very solid 75 STRENGTH, Energizer Bunny-esque 94 STAMINA, and Michael Jordan inspired 91 JUMPING.  The card is an athletic specimen and capable of winning those key battles in the final third that can result in crucial goals against tougher opponents.  Realistically the only area that Mane didn’t blow me away was in the Passing department where his 90 SHORT PASSING really should have felt better than it did.  Every now and then I found myself unsure of how Mané didn’t complete key passes in key moments and in general it was the biggest complaint I could find with this card.  With so many positives it feels like a tiny ripple in an otherwise crazy card… but a ripple nonetheless like the chances missed on his left foot, just make you even more upset when dealing with a 2 million coin card.

It pains me to say this, but I am not sure I 100% can recommend this card… “but you just said all these amazing things about the card, how can you not recommend it?”  Simply put, yes this card is amazing and if you want to use him then you are certainly getting a weapon to unleash upon your opponents.  But at 2 million coins I just feel like you are overpaying and will feel the slight disappointment that I did when the card doesn’t quite reach the heights that you are paying for.  Hoping you are all safe and well.  Cheers for reading. 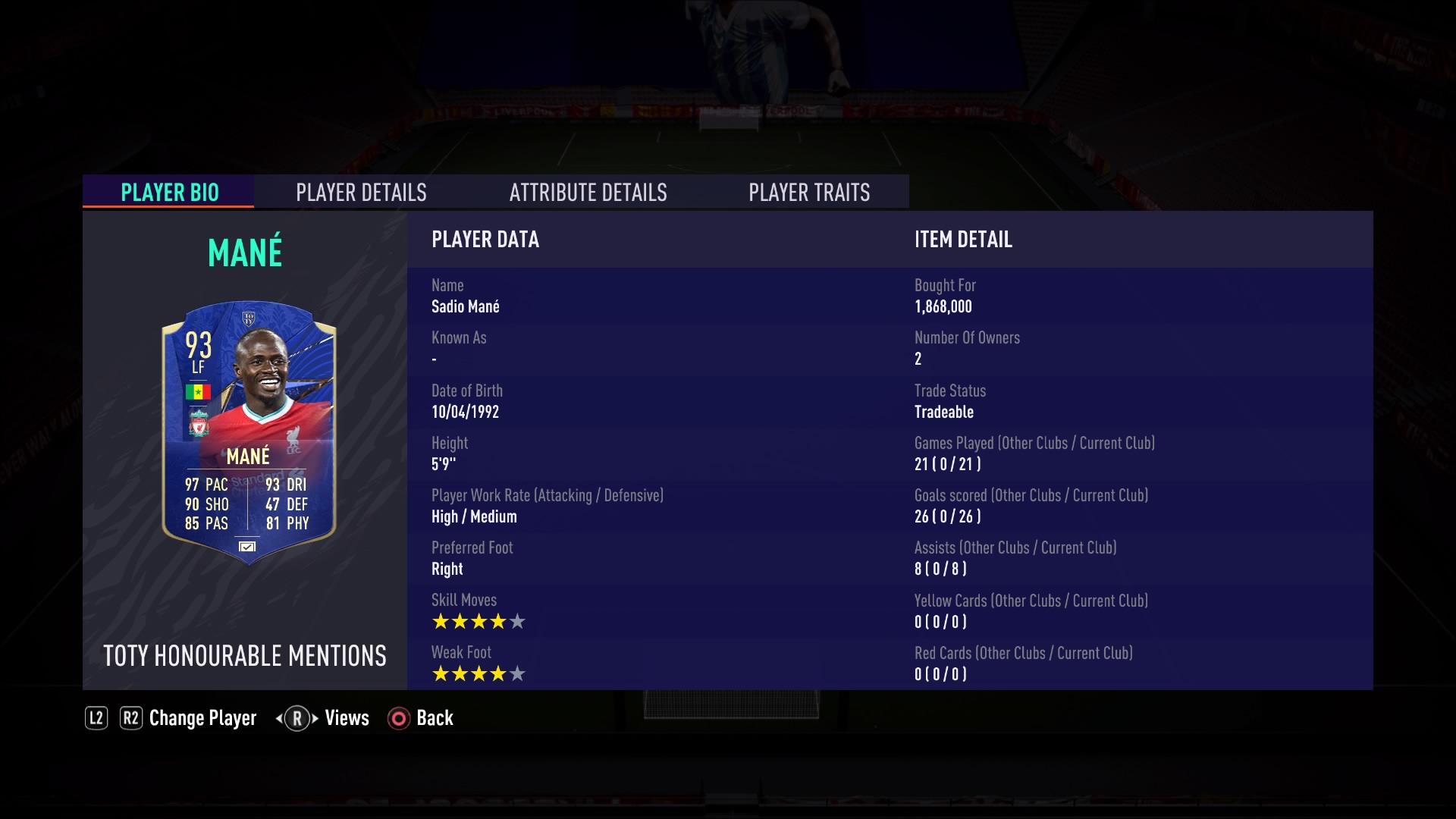 Where to start? I've tried a lot of players this year. Puskas middle, Ronaldo IF, Mbappe RB and many more But I most be honest with you guys. Mane is without a doubt the best player I've used this year. His movement is unbelievable!! He's sooo quick and he actually feels like a TOTY. He has that TOTY touch on the ball and if you have tried Mane TOTY last year, I can tell you, that he's even better this year. Normally I don't do reviews, but after I tried Mane, I instantly knew, that I needed to let you guys know!

Pace: 10/10, which is duo to insanely quick feets and his movement.

Shooting: 10/10. He actually feels like, he has 99 finishing and his 4* weak foot feels like 5*. I normally don't do reviews, but this card is something speciel! He's the kind of player, that uses powershots and if you green time your shots. Uff!! 11/10

Dribbling: 10/10 Where to start?... Unreal. His agility, ball control, dribbling and reactions is just unreal. I keep saying, that he's unreal but it so true. You need to try this card! Please guys, trust me on this one.

Defending. ?/? His heading is good tho! Very surprising if I have to be fair. I can't give his defending a rating, but I'll give his heading 9/10!

Physicality: 7.5/10. It could be better, but his jumping and his ability to retake the ball is very nice! He has that icon/toty b*llshit factor, when he is lucky

I started crafting Premium League Upgrade packs after seeing an effective method. On my third premium pack, I saw the purple flares and out he walked. Worth 1.6 mil but untradeable, he flew straight into my starting 11 instead of SIF Insigne. That left both Mane and HL Hernandez on 8 chem, but little difference was noticed with them being two of the best non icon LW and LB on the game. I was playing awfully up to then, struggling to beat teams and score goals. Man changed they dynamic completely, scoring outrageous outside the box and tough angle shots off both feet. He is the definition of pace abuse. I've used the likes of FB Robben, HL Lozano and Hero Teixeira, but Mane is in a different pace league. Joe Gomez, Varane and Kyle Walker just can't compete and this is the type of card that will put those meta golds out of business. Even 700k IF CB Walker get's destroyed and that's saying something. If you happen to have a few spare million coins around the club, you'd be a fool not to buy him.

Wow. What card. One of the best cards I've ever tried in fifa. His pace is crazy good, he is so fast that your opponents defenders won't even get a chance, except if these defenders are world class defenders or brilliant icons. His 95 finishing is a wonderful upgrade from his base card. His dribbling is fast and he is great on the ball, always keeps himself composed in front of goal and in stressful situations.

So I packed this card untradeable from one of my 125k packs from icon swaps. After using his TOTY for 3 months in FIFA 20 I was very excited. I tried him in Rivals and FUT Champions as both a left and a right striker in 5-2-1-2 and also 3-5-2.

First of all, his pace is awesome. He is very fast. I'm not really someone who plays down the wings, but this guy could be very good as a wide player. His dribbling is super responsive and he feels light on his feet. However, he doesn't have that ultimate smooth feeling like Neymar or even Mahrez' special card.

His passing is alright, but it isn't anything special. I personally wouldn't use him as a CAM. His stamina is perfect and he doesn't feel super weak (but not strong either).

Now one of the most important things, his shooting: His finishing on his strong foot is very good, especially near post. His finesses are good, but he lacks the finesse shot trait.

HOWEVER, his left foot doesn't feel anything near a 4*. It honestly feels like a 2* weak foot. He completely missed the target a lot of times when I tried to shoot on his left.

For that reason and because of his price, I really don't think he is worth his price. If he was around 1 million or cheaper, I'd say this is a good deal, but at 1.6 or 1.9 on PS I can't recommend him.

Shooting on his right foot