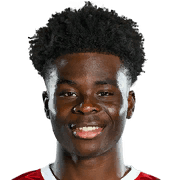 I play Ollie Wakins' 84 rated inform alongside Joao Victors FUT Freeze in ST so I needed an English RM in the Premier League to get a green link with Watkins to keep him on full chem. At first, I had Jarrod Bowen's 82 rated inform card and I absolutely hated it. He just simply wasn't good for me, but there were no other English RM's that play in the Premier League with good cards apart from him... That was until Saka's card came out. As soon as Saka came out I sold Bowen and bought him right away and my god was that an excellent decision!! I use a deadeye chemistry style on him and he feels much better than Bowen in-game and is extremely cheap!

Hell yes. I used him in a 4-2-3-1 in the WL, as a RM. He played well, he was one of the better players in my arsenal only team. He helped defend too. It was fun, obviously he is not quite meta! But another card and he might just be.

Pace - He is pretty damn quick. Enough to get past defenders with the right timing.

Passing - His passing feels really good. Crossing with this card even on his weak foot is actually impressive. Especially considering he is an 81.

Stamina - He has enough stamina that it isn't really a problem unless you are really charging around with him. Perhaps towards the end of extra time he gets a bit tired. but alot of even meta players do.

Defending - I had LM and RM stay back to help defend and he did a pretty decent job here. I was impressed

Pace - He isn't quite as quick as the very fastest players.

Dribbling - As fun as he is when you dribble he is missing the 5* if you need that, he also isn't quite as agile as I expected him to be.

Shooting - He scored a lot more goals than I realised, though he missed a few crucial opportunities. He might be better if you boost his shooting but I decided to focus on his creative abilities with my engine chem style.

Price - 40k for an 81 inform RM is quite a lot. It isn't bad per-se but there are better options for the price.

Other physical - he is pretty weak as you expect. Not much else to say here. His balance and stuff kind of makes up for it a bit, but he is still not quite elite.