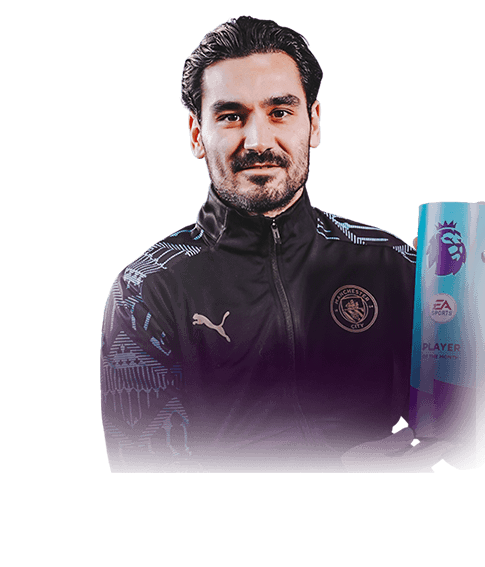 As a Man City fan I voted for Gundogan and did him straight away but not only was this deserved, but he's pretty good in game. There aren't too many good premier league CM's apart from pogba and wijnaldum so i wanted to try Gundogan. Not only that but he is the cheapest Prem POTM that has come out, so if you have a prem team he is a perfect fit. He is overall a very nice card and weekend league ready. He played as a LCM in the 4-1-2-1-2(2) with Kante at CDM and Wijnaldum at RCM. I have also used 87 Red IF Pogba and thought that Ikay was almost as good.

Physicality - His strength is good enough for his position

I'll start of by saying this, he may have the fakest passing stats on all of fifa 21. Obviously you will think "he will have good passing with 91 short passing" but ingame his passes are pixel perfect. Every kind of pass he does is on point. I am a city fan so obviously i was going to do this card as soon as i saw 83 squad. But i did him just because it was gundogan and is one of my idols with kdb but i was sooo surprised when i used him and he was this good. His dribbling is fantastic and even with the agility and balance hes fine. You know he's going to be big ingame but genuinely if anything that has helped him. He normally has just 77 strength but ingame he feels like he has +10 that. His interceptions are very solid and his long shots are exactly what you'd expect from this guy and his 4* wf is a lie, has a 4.5*. What a card for only 50k this guy is. The only flaw I think that means much is his stamina. But just sub him off 70th minute? Its really not a big deal whatsoever.

Very good all round dribbling

Pace all round (not too big of a deal at cdm)

Quite big ingame can be a pro and a con

(Sorry for the bad english) I tried this card for fun as i am a gundogan fan and i must say for the price it is really strong. I played 5 games with him (div 3) and I noticed that he always has the position he defends and attacks well and sets up the game with excellent passes, even if from the stats he does not seem very agile and has a good shot, moreover he can send the forwards well on goal, highly recommended.