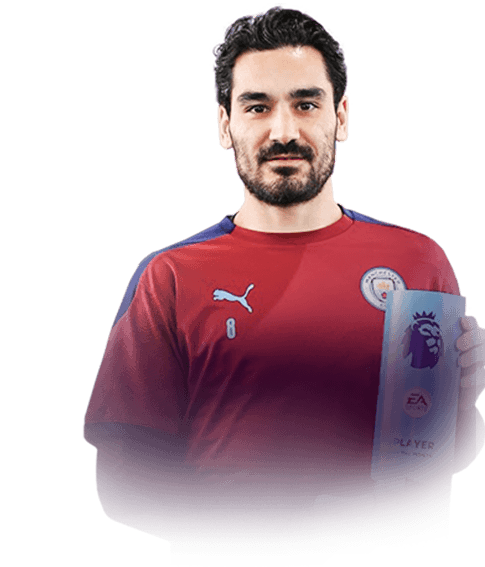 Like a lot of the FIFA community, I voted for Lingard to win the PL POTM and was a little disappointed to find out he didn't win. However, Ilkay Gundogan (I believe he rightfully deserved to win) is a great card contrary to popular belief. The SHADOW chemistry style without a shadow of a doubt (see what I did there ;) ) is the best way to get the most out of Gundo and it is vital to use him in a midfield trio or quartet at CM.

With a SHADOW, his 84 pace is not the best, but is reasonable for the use of a box-to-box central midfielder who will do the job for you. 84 for both Acceleration and Sprint Speed is a great combo.

Shooting stats are an absolute lie; when you set this guy on Get Forward and Get Into Box For Crosses, he will finish every opportunity for you especially with his overpowered far post shots. His Composure of 92 is also great for his shooting. Shots outside of the box? No problem, Mr. Whippy will supply the goods, sometimes going to bins, into the side netting and his finesse shots are decent with his right foot. His 4* Weak Foot isn't too bad either, just don't try any finesse shots with his left and you should be okay.

Scholes-esque. The man's vision and range for passing is so good, he could probably find a trophy in Tottenham Hotspur's trophy cabinet. All jokes aside, through balls and assists galore with 91 Vision, 93 Short Passing, 90 Long Passing and a bonus 90 Curve which can prove vital in certain situations is amazing. One of the most complete playmakers in the premier league.

He really is silky Ilkay. His ball control of 93 is greatly complemented with his height of 5'11 and can perform many great turns despite his Agility of only 82. 82 Balance and 90 Reactions also ensure he never slips like Steven Gerrard and is very calm on the ball. Does not feel clunky whatsoever with a bonus 4* Skill Moves to skip past opposition players gracefully with his in-game stat of 89 dribbling as well.

Mr. Whippy can also become Mr. Clippy as he clips onto opposition attackers and with the use of the SHADOW chemistry style, Gundogan surprisingly acquires great defensive stats of 85 Defensive Awareness, 89 Sliding Tackle and 87 Sliding Tackle. With his immaculate 92 Interceptions as a result of the upgrade from the chemistry style, you may opt to use him in a CDM role and he will do bits, however I believe there are better options in the Premier League. Gundogan's Medium Defensive Work Rate could be better however it is not too noticeable in game.

This is where the card is not so great. Yes, he is able to use his strength in his hold up play to shield the ball, however he is not too great in bullying attackers off the ball. 78 Stamina is the massive let-down, however playing him at CM will not drain his stamina as much.

Overall, a solid card I really enjoy using. If you are a City fan or in need of a Premier League midfielder I would heavily advise you to complete this SBC. If not, I would still advise completing this SBC as he could be used as SBC fodder down the line and is a fun and great card to use. Thanks for reading!!!

Shooting inside and outside the box is better than some strikers

Stamina (should be fine at CM)

Pace could be a little better but still very decent

I, as many in the FIFA community were so as well, was hoping that my dreams aligned and we'd be given by the gods a POTM Lingard, who despite a poor week foot, was still Lingardinho so was instantly worth it. Then this came out and everyone, rightly, complained. However, despite the instant stigma around him, I'd thought i would try him and see if he's worth it. The easy answer is no. I played 1 rivals game and he played CM with a shadow. He was slow, unresponsive and hit some pathetic shots on goal, his passing was good, as long as I made sure the player i was passing to was 2cm in front of me, he failed to tackle on numerous occasions, and cannot jump to save his life. My TOTGS Papu Gomez felt stronger than this. He felt like he had 2*skills and 0* week foot. So not only has this card been bad because it's the wrong choice (I would've rather seen Bruno than this) but he is incompetent in-game in his only position where he could be competent, Don't do him and buy Gullit moments, because you can do that now. On the topic of icons, if you're going to do this sbc, you really have to question why are you not grinding for Deco moments? Easy to obtain, icon links and more versatile player with competent defending stats, yes you lose a weak foot, but you gain a player double the quality and is bar far up there as one of the most underrated icons. Oh and I won that game 5-0 and he managed no assists, tells you everything really.

Pace (even with shadow)

Passing for more than 10 metres

Dribbling(similar to Bruno with low agility and balance so both can't really take anyone on, but at least bruno felt smooth on the ball, the composure stat was a lie