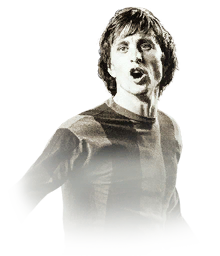 So i got insanely lucky, and packed this guy from elite 1 rewards. Now, he should be 98 rated, of course. But he's still insane. I used moments R9 in Fifa 19, but Cruyff is better. I played around 45 games of WL, and 30 games of rivals. His goal record is obviously insane. I played him as a striker and Cam. I would recommend to play him as a cam, but, if you bought this card for coins, i'd understand if you'd play him as a striker.

if you have the coins and debating between him and the prime or with pele or r9 or r7 toty , let me tell this as i used all of them , this is the best striker in game because he has it all , he is so agile and so clinical inside and outside the box , all of top striker in games misses something but PIM cruyff simply can do anything , even his stamina is decent as a striker , from the moment he enter my team he had an immediate impact , his shooting passing dribbling all are great , also he has something i can't describe , every time you think he missed the ball he eventually get it i don't know how or why but he did it every time , to sum up , PIM cruyff i so fun to use and also so clinical

I used this guy for almost 2 weeks and he is an absolute beast! I got him by doing his sbc.Completly worth it!

-He is very fast

-His shooting is insane

-His dribbling is god

-With an hawk he is almost perfect