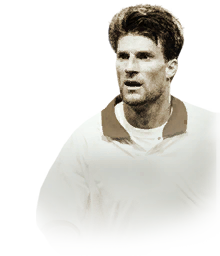 As i'm Danish, i have a huge admiration for Michael Laudrup. hearing my father always telling stories about how good he was.

i tried his 91 Prime icon, and was not impressed. but this Moments card is something else!

Pace 87: I use a hunter on him, and he is really fast! he feels so smooth, and just glides past players!

Shooting 81: I boosted his shooting with Hunter, and it is actually really consistent, his shot power lacks a little something, but he easily finishes most chances inside the box.

Passing 92: WOW! He just sprinkles amazing passes left, right and center. rarely misses any. this is what he was known for, and it really does him justice!

Dribling 94: One word! SMOOTH! - he is one of those players who will just glide past defenders with ease, never really makes a bad touch. also one of his main stats IRL

Physical 66: Not anything to write home about. his moments card has a little more stamina than his 91, i normally use him for the entire game, but might need to be subbed off after 80 minutes.

For the money, he is an absolute baller! and will tear opponents CDM's & CB's to shreds. he is fast, amazing on the pass, smooth AF, and always in the right position! absolutely worth every coin.

Alright in the air against smaller defenders

Danish Legend with a beautiful head of hair!

lets start off by saying i packed this laudrup out of a rare mega pack and ever since i used him he has been phenomenal. he is also a very good player in real life but it's ea so nothing matters except money. ok now lets get our eyes on the prize, laudrup is a very good finisher and i must say that the appropriate chem style for him is a hawk because his lack of shot power and long shots but a hawk will make him 87 shot power and 88 long shots. overall i give laudrup a 9/10

nothing much other than his stamina