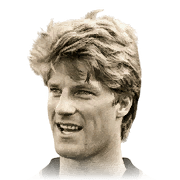 I bought Laudrup as Im waiting for my idol Juan Roman Riquelme to go to his expected price, instead of losing a lot of coins. I managed to snipe him for 405000 which I thought is good value for his good. I used Finisher to get him the much needed boost in agility since he doesn't have 5* skill moves... I thought this card with Neymar in the middle of a 4-2-3-1 would be powerful, but it was the other way around... He was clunky, shot power was still lacking even with a huge boost and he just didnt feel like a 405k card. I am disappointed as I love Laudrup as much as Messi, JR10, Xavi. I would only recommend using him if you need a cheap prime Icon to link everything together, but for this amount of coins you can get much better cards for a lot cheaper.