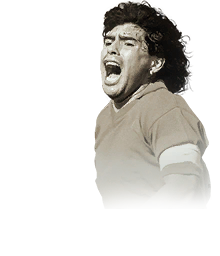 Its Maradona I don't have to say much, he is exactly his card. Great at dribbling, shooting, passing of course but obviously he is going to have quite low stamina and be very weak and have a bad weak foot. He does what you want from him and that's it really. If you don't mind having a weak player up front for you that costs 3 million that can do anything but get past any mad strong players like Varane, VVD, Maldini etc... then he is the guy for that!

9.85, just lacking that wf I suppose and a couple of things I mentioned here and there.

So first of all i don't play this game competitively never have never will i have used pretty much every card in every fifa since fifa 10 and this guy blows my mind there is something about prime moments this year that make them on another level to anyone else the team linked is the team i have used for 20 games pretty fun although some of the players wernt the best but like i said i cant stand all the meta players. I bought him for about 13 million coins on pc still not sold him as i love him at CAM and only CAM !!! His stamina is still a issue but my god his dribbling is insane and something i noticed which made no sense with the card is the fact he has really dam good heading Below are the pros and cons i would recommend to try him out as you will have as much fun as i did :)

Dribbling the best in the game

Passing is very good (But i rarely was passing with him)

Stamina is a huge issue hes done around the 65th minute

Lets begin, I packed him in a 85 x 5 player pack and a destroyed my half table cause i was sooo happpy. In the Weekend League I tried him and WOOOOOW WOOOWZA WOOOW. A grenade in attacking. His passes are Incredible his shooting and dribbling too. The only Thing wat wasnt more than great was the weak foot. You will see, his WF is very bad. But Hey, he was my Game Changer every Game in WL so Im not really able to say bad things abot the Icon of Icons. In a 4231 He was my central CAm with Bergwijn Future Stars on his right and Neymar on his left. With Werner 86 Fut Champions he delivered an he did it sometimes alone. Shooting from Distance, Powerful dribbling, great Pace and godly long passes were his friends in my games. He was my 2nd best goalgetter after werner but his assists weren't from this Planet. His strengh is ok because of Balance and Agility