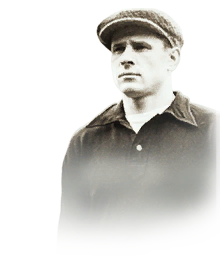 Keepers in FUT are like buying apples from the market.  You can find an apple that is bright and shiny on the outside but has become rotten on the inside.  Sometimes, the most expensive apple doesn’t mean it will taste good at all.  Other times, you come across a type of apple that is cheap, yet when baked in a pie is the perfect ingredient to get the job done.  In the end, you need apples, but they are never your first priority when entering the store.
I do not remember a FIFA where keepers have been made so obsolete as FIFA 21.  Even the “cheap beasts” of old have simply just turned into “cheaper options.”  I see Nick Pope and Ter Stegen every weekend, but having tried them I am not sure they have any benefit over other options beyond the price tag.  However, this weekend I really wanted to put the keeper debate in my mind to rest, reviewing the 2nd highest rated and third most expensive keeper in the game, The Black Spider, Prime ICON Moments Lev Yashin.  I am not always sure if keeper chemistry styles are causing any effect at all, but for the purpose of this review, I tried the SHIELD and then BASIC chemistry styles, with zero noticeable difference.  Yet, one bonus I can not deny is that ICON keepers do make squad building that little bit easier… and Lev Yashin was the man in the sticks all weekend long in the following squad: 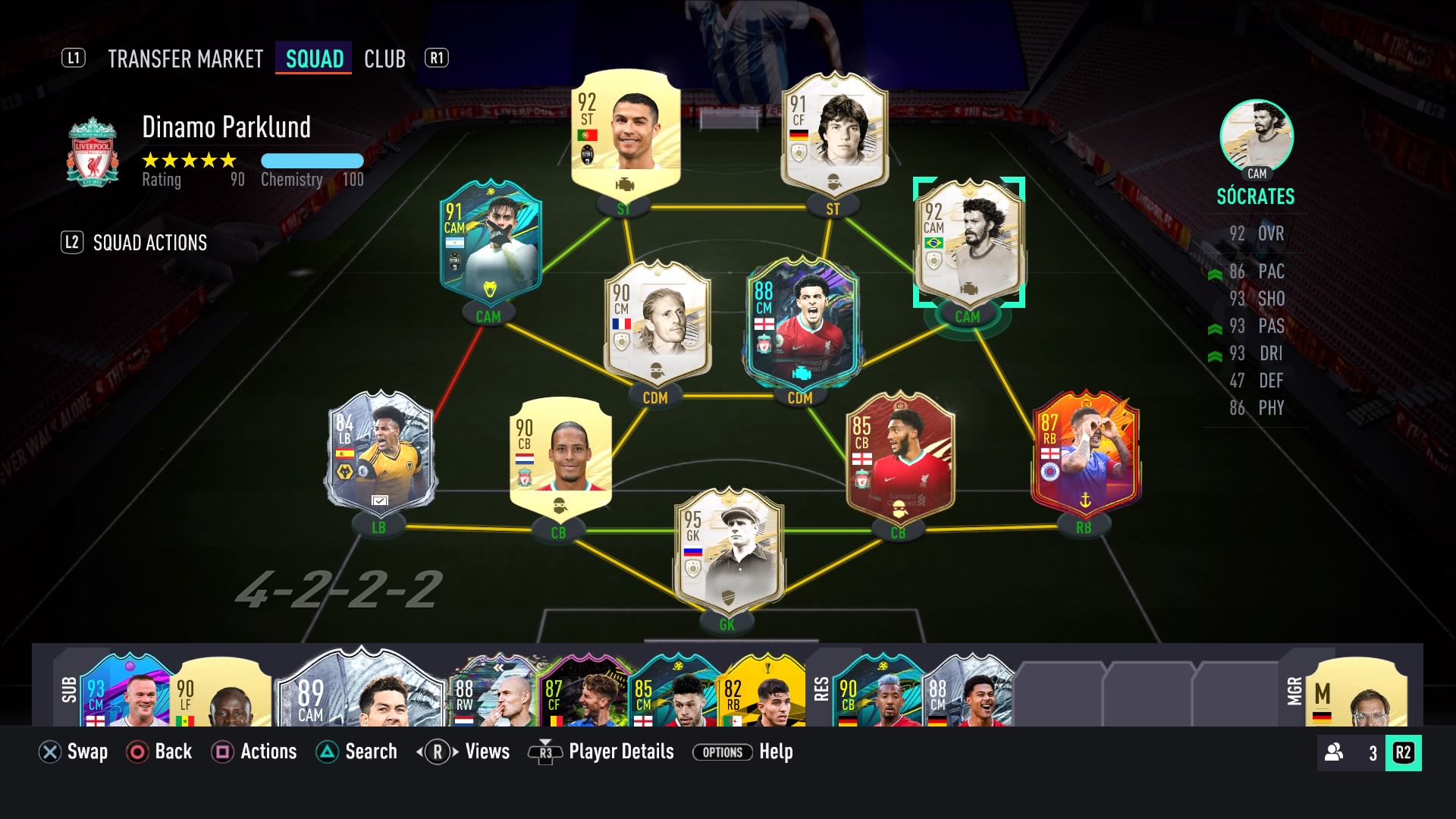 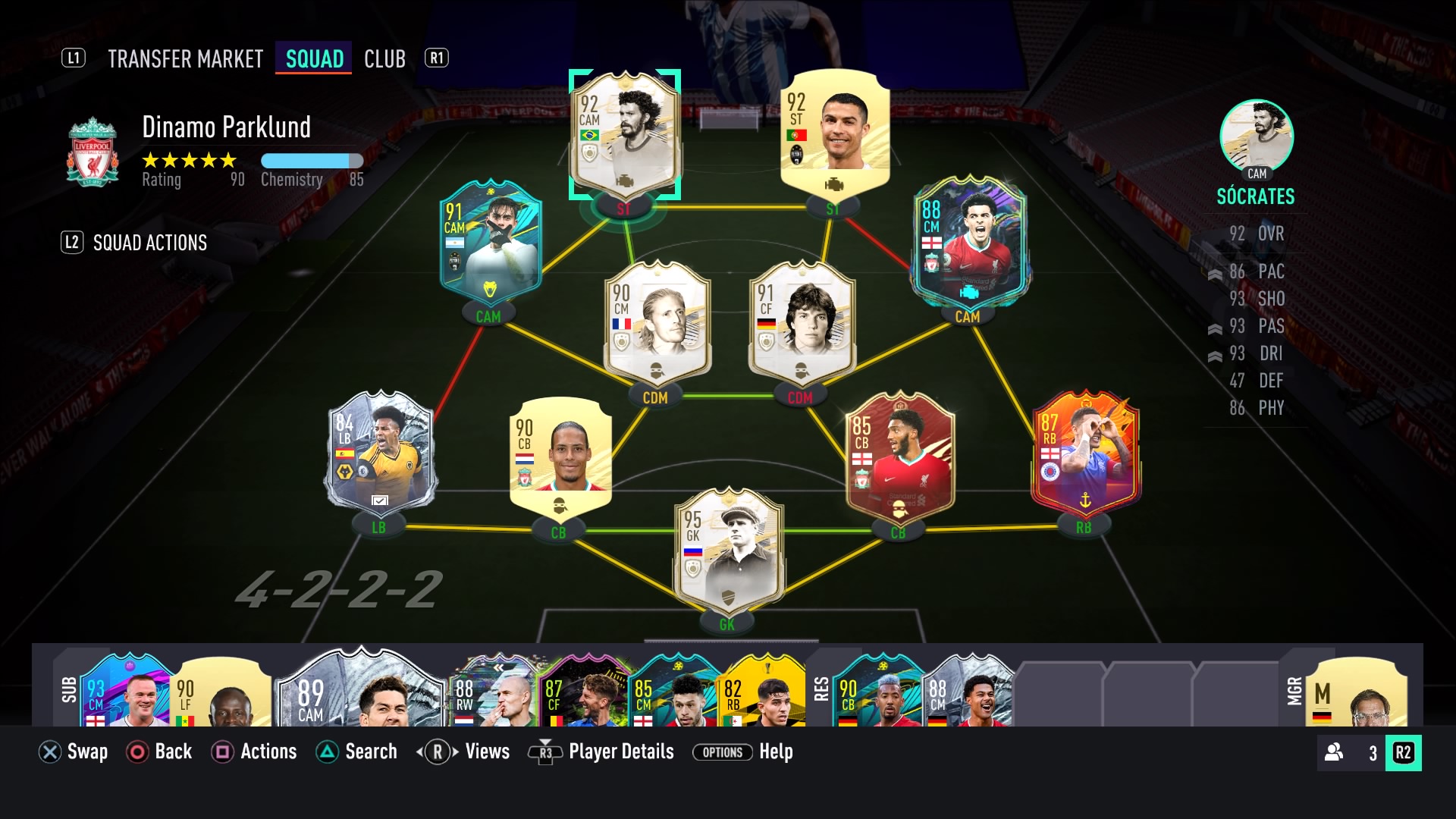 This might be the worst keeper I have used so far in FIFA 21, no cap!  No seriously, he wasn’t wearing the cap… to be honest, I thought that might be part of the premium price, and I might have even excused some of his shortcomings if he had looked more like a character from Peaky Blinders and less like a kit man standing in my goal.  But I am serious when I say that Yashin was a disaster for me this weekend and I am not even considering the price when I say this.  I have come to a point where I currently trust Courtois or Ederson in goal, and that is about it for me.  They are generally consistent and you have a good idea of what they will do next.  With Yashin, I honestly couldn’t be sure if he would make a blinding reaction save, or drop the ball into my goal from minute to minute in a match.

I understand that in the comments there will be examples of all keepers being brilliant and others that have been abysmal, and I think that is the point to make here.  The keepers in FIFA 21 are borderline obsolete at this point and the amount of unexplainable events you see on Twitter feeds and Instagram pages every weekend just cements that point.  However, like I previously said… I know that Ederson is going to come for almost every cross and will get a hand to it… but with Yashin, I could never be sure where his head was at and resulted in terrible moments in the match.

I am kicking myself now that I was not more on the ball with the video for this review.  The fact is that I really thought I was going to be reviewing a keeper who would steal a match or two for me and really blow away what I had previously used. Because of this, I was only focused on the key saves he made, however, if I had my time back, I would have focused more on saving clips where Yashin was costing me goals and matches with his antics.  In the end, my video is more just a couple of saves he made in big matches and overall doesn’t paint the picture of what happened… my apologies for that.  However, I can provide you with some other proof in the form of stats.  This weekend I conceded 50 goals in 30 matches… this is a little on the high end for me but the breakdown is what really caught my eye.  In the 20 matches with Yashin in goal, I conceded 43 goals… while only 7 in the following 10 matches with Ederson.  True, I was obviously playing better FIFA myself at this point… but Yashin did nothing to bail me out during my struggles either.

For 1 million coins I want something… anything!  I would even take the gimmick of the hat and have been happy.  But what I received was a problematic experience of having an unpredictable and unreliable keeper… and in the end that is a lot of coins to pay for stress.  I can actually pinpoint the moment things went downhill for me… in my 6th match of the weekend… currently 5 - 0… a corner comes into the box and is falling on the 6 yard box… Yashin comes for it late… jumps… misses the ball completely… and Rooney nods home the winning goal in the 82nd minute.  From that moment on it was a continuous spiral and Yashin’s confidence never recovered.

Truthfully I think a lot of the Yashin problems I experienced come down to the fact that he appears smaller in goal than his 189cm | 6’2 frame would suggest and this affects how he comes for crosses and also some shot stopping.  While I won’t deny that Yashin certainly made saves, I think the key is that there was not a single save that a gold Nick Pope could not have dealt with and is truly the most concerning observation for any FUT Managers planning on shelling out the coins to bring this card into their squad.

I constantly review the best cards… new promos, new ICONs & all top options in the game.  Obviously, this leads to a lot of 9/10 and above ratings given the wide variety of strengths that these cards can display across 20 matches.  However, with Yashin, even after 20 matches I am not sure that he really demonstrated anything to me of value.  In the end I felt a consistent reluctance to play even one more game with him in my squad.  I think I was due for a good run of form in the last 10 matches that I played this Weekend League regardless of who was in goal…and a change to the 4-3-1-2 was a huge help (new tactics I am using, with a review on my YouTube: MaeNine coming this week), but I truly believe in the depth of my soul that I would not have managed Elite had Yashin stayed in the squad to complete those matches.  This card gets a hard pass from me… and I am interested to hear in the comments who you are trusting to protect the goal in your squads. Hoping you are safe and well.  Cheers for reading. 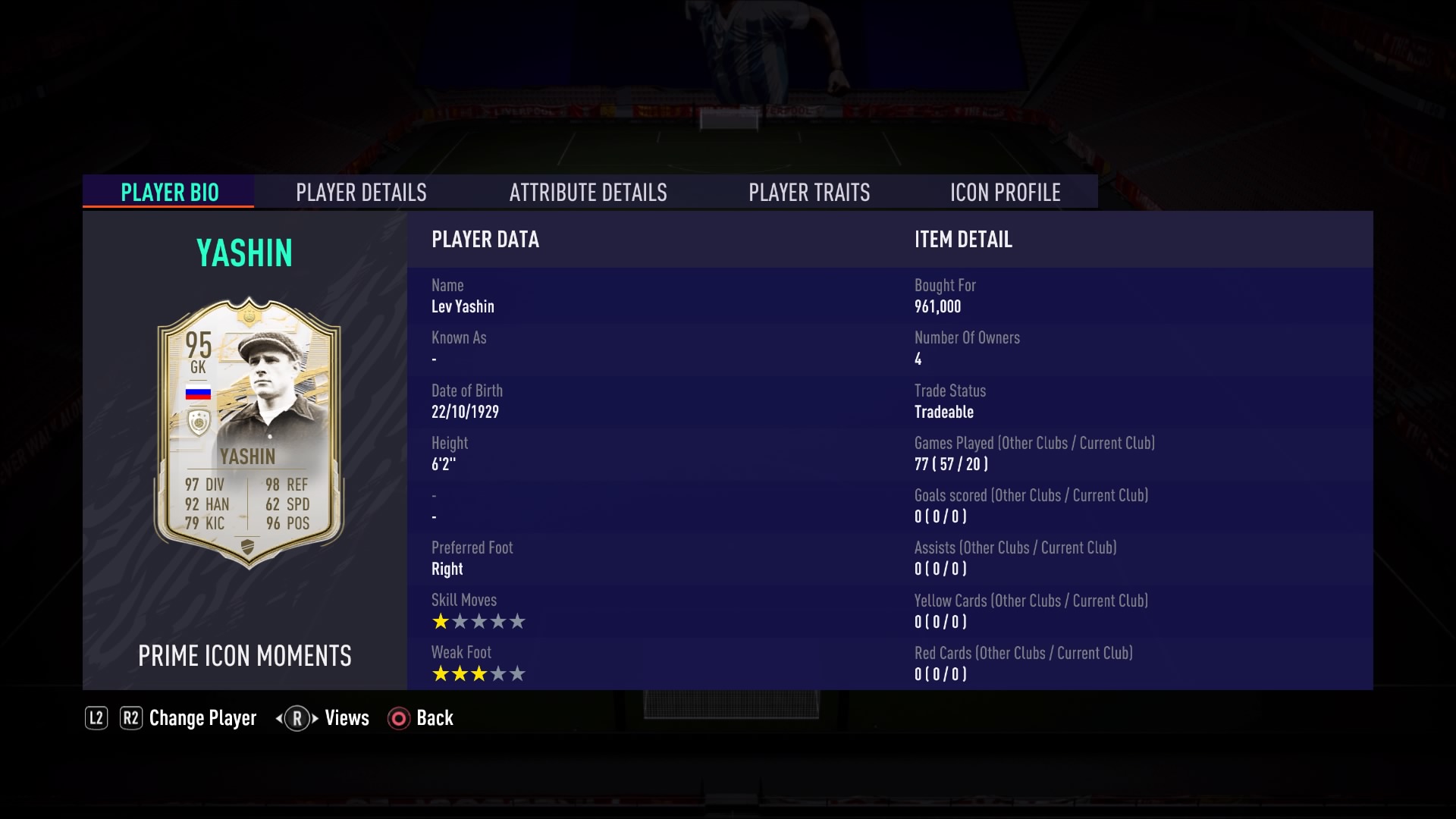 No reviews were found