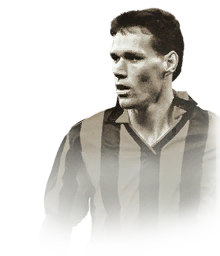 I've tried all of his cards besides the mid, the lower version are what you'd expect: incredible at finishing but clunky. This makes him good but not great. This card changes that. He is incredibly agile, the stats are not fake and it makes him one of the best pure strikers I've used on this game. If you pair him with a fast striker I really don't see his pace as a con because his positioning is fantastic. His shot on either foot is up there with Eusebio, and I know I already said it but his dribbling is so so sooooo cracked. When you have a striker who can turn like he does and shoot like he does you are bound to cause havoc. The only true con with this card is the lack of skills but the left stick dribbling is so good it's manageable. Look, there's better Icon strikers but they all cost 2m plus. This is a fantastic icon for the price.

-Pace (he feels faster than the stats but still isn't rapid)

Wow, he is so much better than his stats tell you. His weak foot is 5* and his shooting is perfect. his dribbling is far better than it looks. He's just a little slow, that's it really. Very solid card i would recommend him to a lot of people. Have fun with this card wen you get him. A lot of fun.

Shooting is insane all round

Pace could be better