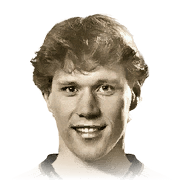 Not that bad of a card ngl. I think people naturally think icons like van basten are bad bc of the 3* sm, balance and what not but with an engine he isn't that bad really. I enjoy using him even though it was painful getting him from the icon pack. But I do think he is a solid card. Shooting is obviously insane, Dribbling is alright, pace is meh and passing is better than expected. Just can be a bit big ingame (H&A+).

Shooting is insane all round

At first, I like tall Players which have some pace. Before I played van Basten, I tried Drogba Baby and Kluivert Prime. Both of them had 4 Star Skills and are quicker but they had some trouble with finishing and the ball control was some times really bad.

Now you know I have a bit of experience.