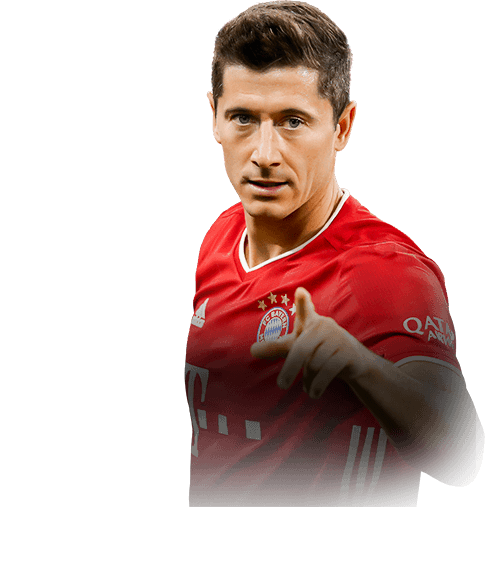 His real-life stats are currently 9 goals and 2 assists in 7 matches in domestic competition. He also received 0 yellow cards and 0 red cards.

So I got Robert Lewandowski from red picks yesterday, so i thought instead of just chucking him into an sbc, ill give him a try. The card felt more agile then i thought he would, and boy could he finish. I tried him out for 10 games division 4 div rivals, and 5 fut champs games. He is a machine. I don't actually recall him missing a chance at all. The only thing slightly lacking was a bit of pace to break away from defenders but i didn't really feel the difference too much: he was ok with a hunter. I tried him in CAM in 4312, and i really noticed how he has amazing passing. He was threading perfect balls in behind, passing the ball about like prime xavi. He is usable in cam, and st too. I would definitely recommend this very underrated card. In those 15 games i played, he got 21 goals and 13 assists.

Slight lack of pace, but i didnt notice too much.

i decided to sell my Butragueno and buy Lewa 94. I have been using him for 22 games in the Weekend league right now. and I can tell you he doesn't disappoint. banged in 34 goals in those games (mostly gold 2 opponents) because I mostly reach that in Weekend League. besides that, he is really fun to use

shooting is insane bangs in everything

dribbling is good, he is not extremely fast like that meta player Neymar and Mbappe, but he isn't really clucky as well

passing is more than perfect for

Pace is good enough for my playstyle ( mostly possession).