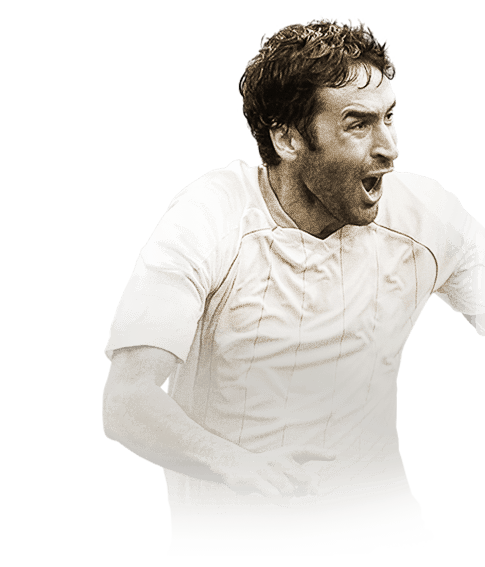 I used him in 2 different formations. Firstly, as my left ST in the 4-2-2-2 alongside Prime Icon Kaka and secondly, as my CAM in the 4-2-3-1. I used him with the Hunter Chemistry style to boost that Pace primarily. I played 5 games in Division 1 Rivals with Icon Moments Raul. Let’s begin.

CAM/CF with the stay forward while attacking instructions. He is also an extremely effective striker, but after using him for 5 games in D1, CAM is where he belongs imo.'

2 million is quite steep for this card to be completely honest. You can pick up equally comparable players at a fraction of the cost, but that’s boring imo :/ A fair price for him would be 1.3-1.4 million coins.

I’d say he is close to the meta of the game, but something about this card, I can’t put a finger on it, makes it stray away from the perfect meta in this game.

He is outstanding in terms of his finishing ability, dribbling, passing and his attacking AI is exceptional as well, and if you’re a Spanish or Real Madrid fan, you will absolutely love this card. He is the GOAT Raul Gonzalves, one of Reals all time greats!

His pace overall is quite impressive for a ST/CAM. A combination of 90 Sprint Speed and 89 Acceleration when boosted by a further +10 with the Hunter chemistry style, make him quite effective even on counter attacks. He isn’t by any means as quick as an Mbappe, but his pace does get the job done in either position. I’d definitely recommend the use of the hunter /catalyst chemistry style to max out that pace, which makes him effective even on counter attacks.

Simply outstanding. His left foot is a wand. You can crack it from inside the box or from range, and they will fly in effortlessly for the most part. Now, his finesse shot weren’t as convincing as I expected them to be, and that s due to that mediocre curve statistic of 79. He did score the odd finesse shot from outside the box, but I’d rely on his power strikers and outside the foot shot over his finesse shot. Don’t sleep on that 4 star weak foot either as he was extremely clinical with his right foot as well. He is one of the best finishers that I have used all year! His shooting makes him an elite level ST/CAM and he is up there with the most clinical strikers in the game.

His passing was great on either foot, at the CAM/ST position. He has great passing stats with a combination of 96 Vision, 92 Short passing and 78 Long passing. I could easily pick out my players on either foot effortlessly and was able to play some perfect weighted passes to play my other attacking players through on goal.

His dribbling overall was very impressive. It was touch tight for the most part even in slightly delayed rivals gameplay. He has phenomenal dribbling statistics across the board and it certainly can been felt and seen in game. He could twist, turn and change direction effortlessly and also has the 4 star skills at his disposal. If compared to a Neymar, he’s not quite there yet, but he’s extremely close in terms of responsiveness and hence is an amazing player to dribble with in-game. There is no need to boost his dribbling with a chemistry style.

He has above average strength for a striker (79 strength) and can contest physical duels effectively. He will get pushed off by tougher defenders tho. His 90 stamina is more than adequate to last him the whole 90 or even 120 mins effortlessly. He’s 5”11 in-game which is a good height, and with his 92 jumping he will win you most headers he contests. He can be used as a lethal weapon from corners as well as he has 97 heading accuracy.

He is definitely better than his price, shooting is actually super good and his dribbling is surprisingly good aswell (ik his stats are there and he's got the lean body type, but i think he is one of those icons that you have a mental picture of being bad in your head. I would 100% recommend getting the guy if you need a false 9 attacker/ target man for a good, not insanely expensive price.

Strength could be better