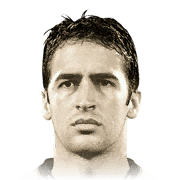 They are all very good and expensive but after 30 games with them, you need a new vibe to have some fun in this (boring and bad) game.

Building a new team every week and trying out some new players, makes the game more fun.

This week i tried out Prime Raul and he is that great that he deserves his first review!

For only 13.-1.4m you get a complete striker with lean body type.

If you want to have some fun, try this player out for 30 games and you won't regret it!

I used engine chemstyle and that worked out perfect!

-Finishing is top tier, 4x wf but his right foot is even good (96 postioning, 96 finishing) + heading

-Dribbling: not super amazing but feels good and light and very responsive. With engine Raul has +90 on all dribble stats

-Body: Lean body type, does not feel heavy and has strenght to hold off the bal (but not adama style of course)

-Pace: Raul is not that quick like mbappe, but with 92 pace he does not feel slow.

I have been saving coins for the past 2 months on FIFA in preparation for TOTY. I'd sorta had enough because the team i was playing with was pure fart. I thought up a team which included this Raul card which I hadn't used since packing him back in the first week of FIFA 19 where back then he was great for me. So, basically I've now played 5 online games in D2 with him and all I can say wow! I'm now funnily enough a D1 player winning all those 5 games I played with him. Of course he has a fantastic team around him which helps him a lot but still he finishes everything, feels insanely agile on the ball and is always in the right goal scoring positions whenever you need. At 5'11 he's certainly feels like he's at least 6'2. With 91 jumping and 96 heading accuracy, he makes it look too easy in the air. After 5 rivals games he finished with a record of 10 goals and 6 assists. I don't normally make reviews on players, but I honestly love this card so much that I thought it was only fair. So, if you have the coins I highly suggest him if you are struggling to find a WL striker. In game my formation was 4222 with Raul and Eto'o up top both on stay central and get in behind

88 Stamina so obviously lasts you the whole game

one thing i can say is the lack of aggression is noticeable to an extent, but, literally means nothing because he doesn't lose the ball

Man, this guy is special. I play him with a hunter, and believe me when I say that he does not miss a single shot. I play him alongside Neymar in a 5-3-2 at ST, and he does not stop scoring and giving assists. He is so fast, shooting is insane, dribbling is amazing, and feels quite strong despite the low aggression and sort of low strength. He also scores from nearly every single corner, and his workrates are perfect. He has 4*4*, which is all you need with this guy. With him being only 500k, I recommend every fifa player to get him, it is such a bargain.