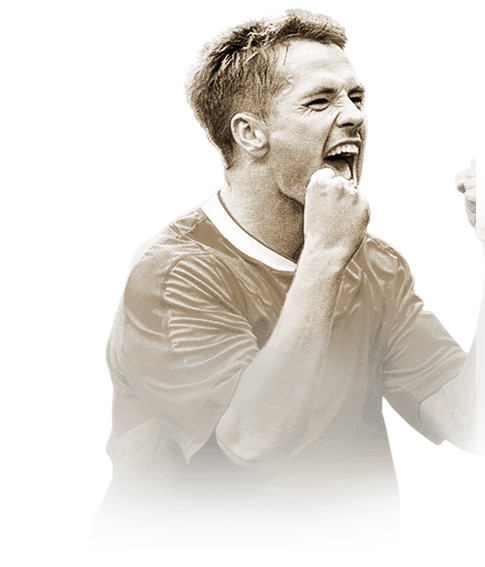 Afters Years reading tons of reviews here comes my first own one. BTW. I am in Div1 (~2100 points) and i usually finish gold 1 in WL. But i rarely reach Elite. Mostly because i feel i am missing the top tier quality upfront most of my opponents have (I never used Neymar or Mbappe as a matter of principle).

So i was pretty hyped up when this card came out because of the Strong link to throwback Rooney and the 5* WF + the finesse trait ( i love finesse shots as much as anybody). Thought he might be the pacy yet agile Finisher to put me over the hump. I went off to a 14-1 start in WL (best this year.) and Owen played his part. When he had the chance to score he did. I played him with the basic chem style to boost speed as well as passing, agility and shot power. Felt it would balance out all little weaknesses. I also played a 4-2-3-1 with him upfront an Prime Baggio behind (my most favourite player of all time) behind.

But: even though he finished as clinical as you can hope for, he didnt felt special. And sure enough: The further I went, the more i struggled. Maybe it is because usually i play a 3-5-2 with two strikers and as a lone striker (with a very slow No 10 in Baggio) he was eaten alive by all upper tier defenders. The most dissapointing thing was his dribbling. He didnt felt agil at all. Especially when you consider his dribbling stats with the basic Chem (they are better than neymars). Maybe it is becaus of his 3* SM, even though i am not a great skiller by any means.

Maybe it was becaus the Gameplay felt clunky all weekend. I dont know, but still: If a player has those dribbling stats, you would expect more agility even when the game play is subpar (which happens more often than not in WL, as we all are well aware of). I will play him again this WL in a 3-5-2 alongside Rooney an Prime Moments Baggio (When i finish all the icon swaps) right behind. So maybe thats the solution. But i also felt against strong defenders that his Med/Med WR are a major Issue. It is really the first time this year, i felt that a High Off. WR would be the solution. Again. Maybe it is because he play as a lone striker. But since many people play a 4-4-2 or 4-2-3-1 i think thats valuable information.

In the End he finished with 36 goals in 28 WL Matches. Which seems to be a fair performance for a striker of his price. But he scored 8 goals in 1 game and in general he scored most of his goals in the first 20 matches. He didnt peform outstanding in crunchtime (last 8 games, i stopped at 20-8) which is a major downer if you have him as a lone ranger upfront in the major goal scoring role.

Always bare in mind. My point of view is: aiming for elite and i am looking for players who can bring me there. Even though i have a decent squad i dont want to crack elite regulary by using Mendy, Neymar, Mbappe and so on.

Shooting - I am critical of the Card overall, but in terms of finishing i have no complains what so ever. He finishes from everywhere, with either foot, just finesse it. It is automatic.

Pace: Well he is pacy, but at this point of the year a 99 speed is more of a must have than a real pro. especially now, when everybody plays Fullbacks like Mbabu, Berchiche an so on as CBs. But still: If he is gone, he is gone.

WF+finesse shot.: I cant stretch enough the satisfaction of beeing able finishing with either foot without even thinking about it. If the card would feel better overall, the combination would be the gamechanger i was hoping for.

Strong link to rooney: It is a minor pro, but still there arent many Englisch Top tier players you can pair rooney with. I mean, Lineker, Shearer, Wright, Gerrard, Lampard are all playable. Owen is still the best solution by quiet a big margin.

Strength: as you would expect, he cant keep up with the top tier defenders in that category.

Dribbling: He is agile, but compared to his stats and his height i was expecting more and was a littel disappointed.

3*SM: Well, if you compete for Elite in the WL you need every advantage you can get. And 3* Skillmoves is a disadvantage, there is no sugarcoating about that.

I used him as my left ST in the 4-2-2-2 alongside Prime Icon Kaka. I Used him with the HAWK Chemistry style to boost that Pace primarily and his Physicals as well. I used him for 4 games in Division 1 Rivals. Let’s begin.

1.8 million is quite steep for this card to be completely honest. If this card had 4 star skills, he could be used competitively imo and that would justify the 1.8 million coin price tag a big more.

He is outstanding in terms of his pace, finishing ability and his attacking AI is exceptional as well even though he has M/M work rates. He is an absolute nightmare to defend, and inside the box he’s one of the deadliest strikers in he game.

A fair price tag down the line for this card will be closer to 1.2 million coins, as right now for 1.8 million coins, you can pick from a variety of meta strikers who will deliver equally in terms of in-game performance, for a much more affordable price.

His pace overall is amazing for a ST! He felt absolutely rapid!

A combination of 94 Sprint Speed and 94 Acceleration when boosted by a further +5 with the HAWK chemistry style, maxes out his pace to 99s. He is hands down one of the fasters strikers I have used in Fifa 21. He can be used to start swift counter attacks from the half way line using a series of give and go passes, which just sets him free. His acceleration is great to use around the box to burst past defenders, leaving them eating dust.

Simply outstanding. EA has upgraded his weak foot to a 5 STAR WEAK FOOT, and OMG is it glorious! He simply does not miss. His 5 STAR WEAK FOOT is simply the highlight of this card, making him one of the best finishers in the game. I’d recommend using power shots with him for the most part and you’ll do amazingly well if you do so. It’s just that his finesse shots from range weren’t the best to be completely honest, and I’d blame it on his curve stat of 75. Boosting his curve by a +10 with the Engine chemistry style is a good shout and will boost his finesses shots. Overall his shooting makes him an elite level striker and he is up there with the most clinical strikers in the game.

As he stands at 5”8 tall, which is on the shorten end of the spectrum for strikers, his overall dribbling feels boosted due his low centre of gravity. He felt smooth on the ball and could easily change direction and wiggle out of tight spaces quite easily. He is easy to manoeuvre even in slightly delayed gameplay, and felt very responsive overall. The only con with his dribbling is the lack of 4 star skill moves, which in my opinion is a big con. If he had the 4 star skills, he could easily be used at a competitive level. A minimum of 4 star skills is quintessential to be used at a competitive level, and this is where this card falls short.

His short passing was consistent on either foot since he has the 5 star weak foot. Dont try spreading the play and making adventurous passes as he has a long passing stat of 50 which is appalling. So keep his passing short and you’ll be good to go.

He is extremely weak. He’s short and has poor physical attributes, leaving him absolutely no chance of winning any physical confrontation with stronger defenders.

Even with the HAWK chemistry style, he didn’t feel much stronger, so I’d use the ENGINE chemistry style instead. He can win you a few headers because of his decent jumping stats, but they’ll all be 50/50s due to his height. His 82 stamina will last you the entire 90 mins no problem, provided you don’t spam that team press button.