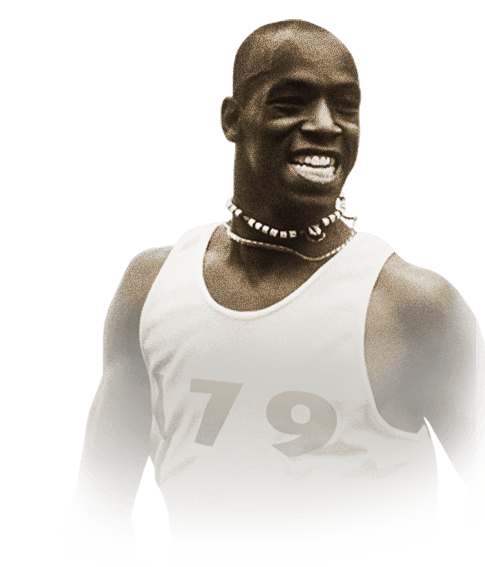 So i completed this sbc because he looks like a incredible card and i really like his dynamic image, At the time of reviewing this the sbc cost 510k and he is actually a Beast. You can Have a lot of fun with this card if you want to enjoy this game I'd highly recommend him if you like ian wright or arsenal 100% and also any one and he feels fine on the ball with an engine

3* Skill but dosent really affect me

First off I want to state why I did this card; I'm a huge Arsenal fan and as soon as I saw this card was released in SBCs I knew I had to do him. Even though he is not a "meta" player I did him and probably would have no matter what his stats were. Going into this card I did not know what to think. Would he be a player with low agility who couldn't finish? Or would I be able to fix the "issues" of this card and bang out goals? Well I slapped an engine chemistry style on this card and got into some games.

I'll get straight to business; I enjoyed this card. Is he cracked? No. Is he perfect? No. Is he a clinical finisher with lots of strengths? Absolutely.

Pace wise Wright is quick; not insanely fast but certainly fast enough to test defenders. I use a lot of through balls and if you play a good ball in behind for him to run onto you know he's gonna get there first.

His dribbling wasn't insane but it definitely wasn't bad. He did at times feel a bit slow/heavy on the ball and not super agile but he definitely can hold his own when left stick dribbling. Considering he is 5'9 his supposed low agility and balance weren't a major issue and this was made less of a problem with the trusty engine chemistry style.

When it comes to Ian's finishing it was consistent and clinical. I felt pretty confident in front of goal that he could put it in the back of the net. Using the engine on him obviously doesn't boost his finishing however I don't think it needs a boost. His 95 positioning and 96 finishing as well as the 92 shot power and 4 star weak foot make his goal scoring something you could bank on. From range he didn't blow my mind, I think this his shooting is pretty no nonsense, no insane finesse shots (he doesn't have the trait) or long shots in my experience however his ability to put away chances as a number 9 were class.

A weakness to mention was his passing. Even with the engine Wrights passing is relatively low tier. He can make short passes just fine but anything more long range or aerial and the consistency just wasn't really there. However I don't think this is a huge downfall for his role in most peoples squads.

I also wanna mention his physicals. Wright seems to be one of those players who causes problems for defenders. His strength and aggression are mid 70s however he just has this habit of nibbling at defenders and winning the ball. One situation where this showed was when he was in behind with Gomez nipping at his heels. With LT held there was no way Gomez was getting past and Wright buried the ball in the bottom corner no problem with his 91 composure shining.

When it comes to weaknesses the obvious one is the 3 star skills. This will be a dealbreaker for certain FIFA players who rely on skills to create unique angles and situations to score in but for my play style of quick build up play and through balls I didn't find it a huge issue.

Overall I enjoyed my time with Ian Wright up front. He really embodies the role of a classic number 9 well; no frills goal scoring machine. When it comes to similar players I actually felt like Timo Werner was a similar one. Both their cards share similarities when it comes to skill moves and weak foot, low agility and balance and low passing stats but they just have this feeling in game that anybody who used Werner in the early stages of the game will know. That being said Wright was more reliable in front of goal than Werner so the comparison isn't that close in retrospect.

As always with these cards I recommend people use the loan before hand. Engines are 400 coins on the market so grab the loan and get into some rival games; this card will click really well for certain play styles so its always good to try before you buy per se.

Clinical finisher on both feet.

Pace to beat most defenders.

so i've seen loads of people hating on this card, going so far so as to say that there are GOLD cards more value for money than his SBC. Lies. Absolute lies. For such a card, 450 K (and soon to fall because fodder will crash down) is a STEAL. Let's dive in, shall we?

Brilliant. His inherent stats being so high, getting a +5 from the chemstyle, and being a short 5'9 makes him a tough player to chase down.

One thing i do want to mention is his positioning. With that 95 POSITIONING, all it takes is a decently placed through ball to split apart the defense. In the 30-ish games ive used him, 90% of my goals came from Through-Balling the defenders' line, Wright's sprint towards the goal, and the inevitable goal. With that Positioning, i rarely found the need to dribble with him since he always got into a good position.

crossing and FKA? Abysmal. Curve? Abysmal. short passing and vision? Decent. Like i said, he is not going to be that guy who puts through balls in behind, HE is the person who gets on the end of those through balls.

Huge L for most. However, with an engine, it's actually quite decent. He doesn't dribble like Prime Cruyff, but he does the job. And like i said, with the elite positioning, you aren't gonna be needing to dance around in the box with him.

Hang on, lemme finish. this is a good card. absolutely. even more so if you don't have a lot of coins or fodder. BUT. I'd recommend waiting for some time, right until he expires, to see if EA release some better icon SBCs that cost around 500K. That's what i'll be doing, since it seems like the smartest option. There's no point in grinding him out only to have EA release a prime Lineker card which is better for around the same price.

dribbling is decent, not the best

most people need at least 4*SM