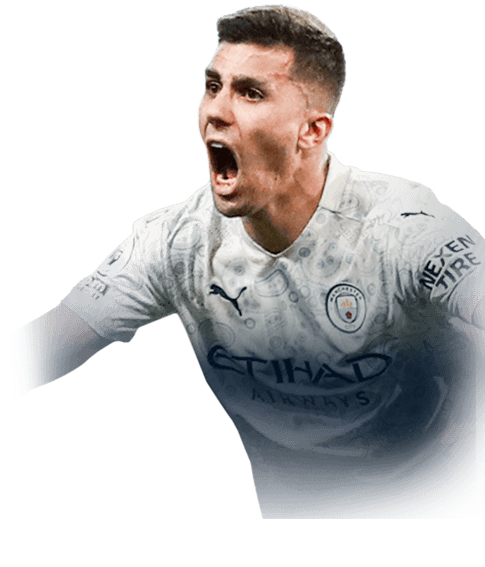 A quick opinion, but Rodri is a fantastic holding midfielder. For context, I got an untradeable Kante back in November that I have used until this Rodri came out. His 6'3 frame is such a bonus to a similar play style. I keep my CDM on drop between defenders and Rodri does an amazing job of pushing up and staying back at the right times. With his pace and defending very little gets by, and when he pushes up he's in the right place at the right time to finish just about any loose ball.

So here goes, my first review! This guy... I completed him today and started playing with him... He is very, very good! I do not have the strongest PL squad, but this guy definitely improved the entire defensive line. I don't know where to start...

I'll go from stat to stat, starting with PACE. His pace is seemingly not the highest. With a shadow chemstyle, I can boost it up to the low 90's and let's be honest. This does the job for a CDM.

Personally, I haven't used him much in front of goal, but whenever he has the chance, he gets in the right position. 86 positioning really shows when needed.

His passing... This is where it gets interesting... I used mid Guardiola before (unfortunately this was my Icon Swaps 2 pack) and Pep's passing is good. But then there is TOTS Rodri. He rather makes the pass when not. His high passing stats, in combination with 90 vision and 91 composure makes his passes unstoppable and very deadly even when under pressure.

The biggest downside is probably his dribbling. He 'feels clunky' as some people would say, but I think the right terms would be 'heavy tank'. He is very strong on the ball, but definitely not the most agile kid in class. 3* skill moves is nothing special, but does the job for a (free) CDM.

This definitely is compensated by the defending stats. Especially with a shadow chemstyle, his defending is near enough perfect. His standing tackles are something I have never seen before. This is what makes him much MUCH better than all versions of Guardiola combined. Also his 4* weak foot comes in clutch when needed!

As well as his defending, his physicals are really clean. 96 stamina is amazing in combination with 92 strength. 86 aggression is high enough to rely on. Also his 6'3" (191 cm) and average body type are really nice for a strong guy.

Another flaw would be the absence of any traits. Finesse shot would make him a better B2B for example.

All in all, he is really noticeable on the pitch and makes a big impact. The card is fairly easily obtainable and therefore very worth your time in my honest opinion. For me, he is "The tall Kanté", or "The Spanish Guardiola".

Despite having a full Serie A squad I decided to grind Rodri as I am a city fan. I didn't start him in any game but brought him on as a sub every game.

He has very good pace and his passing is outstanding. Considering his height and body type he very good with the ball. As he's 6'3 the 78 jumping wasn't really noticeable. He is a beast at defending and has a very good reach as he's tall.

He also has good attacking AI, and he managed to score a goal for me.

Overall I will say its a must do card, as you can always chuck him in an SBC if you dont like him.

Shooting could have been better