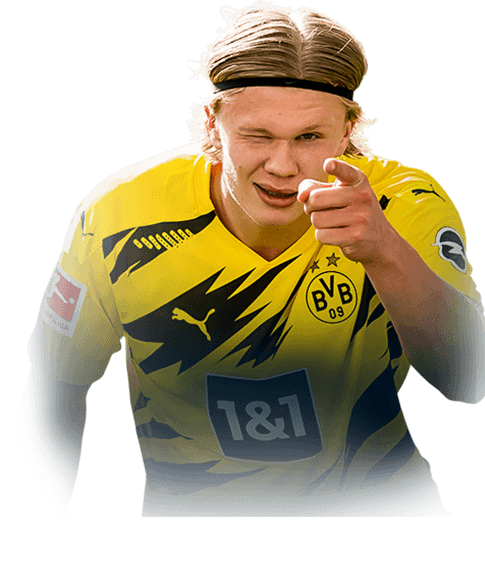 Right - the first thing that needs to be said about this card is that if you're one of those meta players who scrapes off mbappe, neymar, varane, CR7 etc. all year round then this card is not for you and you should keep scrolling. However, if you're looking to try out fun, new cards that are incredible, then this card is perfect for you.

Before using this card, it is important to recognise that it does have its flaws - Haaland isn't the most agile of players due to his body type, he isn't the most versatile of players (he should only be played through the centre, not the wing) and he only has 3-star skill moves. I haven't included the 3-star wf as a flaw because, to be honest, he plays like he has 5-star wf from anywhere inside the box since his shooting is so high - the wf is only noticeable when taking shots from outside the area.

His shooting is incredible and I would regard him as the most lethal finisher I have ever used on any Fifa title. You press shoot from anywhere inside the area and 9 out of 10 times it's going into the back of the net. As for shooting outside of the area, he is still an absolute monster. The lack of finesse shot trait shouldn't be a problem since his finishing and shot power are so high, just make sure you're using his left foot from longer range.

The strength on this card is unrivaled - in one of my first games with him, I played Tots Varane, and let me tell you - Varane didn't stand a chance. when running off the shoulder onto a through ball, he will leave any defender behind. Combine this with his pace and he is an absolute tank. He will either out-pace or out-strength any defender - there is just no other option when using this card.

Whilst his passing may seem low, it has very rarely been an issue for me. Since I am always targeting Haaland with the through ball, he is very rarely the one distributing the pass, meaning you don't have to encounter is long passing very often.

How to get the most out of this card?

I played Haaland alongside Eto'o in a 41212(2) formation. It is important that when playing in a 2-striker formation that the other striker is more versatile than Haaland as this will complement the card very well. Haaland tends to be the striker that I am always looking for with the through ball, whereas Eto'o I tend to shift the ball towards when the through ball is not an option and I have to break a defence down because he is much more agile and has more skill moves in his locker. Saying that, all Haaland needs is a sight on goal and he can first time any ball that comes to him in the box and it will likely go in.

Stay central is essential when playing with this card. When he drifts towards the wings, this card begins to falter and you notice its flaws much more. Saying that - as long as he stays central you rarely notice these flaws.

This card is definitely not for everyone. As said at the beginning, if you are someone who plays to the meta then stay well clear of this card. However, if you are someone who actually likes to have fun and try out different cards, then this card is perfect for you. For me, I was lucky enough to pack this monster from the 83x5 Bundesliga SBC, meaning he will likely remain in my team for the foreseeable future. For those who aren't so fortunate and need to purchase the card on the market, 700k might seem a bargain to some, but an absolute rip-off to others. If you have the coins to spend and want to have some fun, then I would 100% recommend purchasing this card, but if you are maybe on a tighter budget and looking to play more seriously, then this card probably isn't right for you.

Shooting - anything goes in, wf is rarely noticeable

Dribbling - his hold up play is not great

Absolute fucking monster, best card in my team - which was very surprising from what i've heard about him. His power in every way is madddd, he glides through defenses and the only player to ever reach him is ... So yeah his shooting is mad however the wf is annoying as he has missed a few shots that would 100% go in on a 4 or 5* wf player. Although with the power if you are doing a straight on shot i feel that it doesn't make a difference as long as its on target and ur going for side netting. The clips on the video aren't the greatest however i think you can get an idea of his pace and shooting.

WOW. That is all the words I have for Haaland. Was looking for a replacement in my attack, then did the c*rona and amiri objectives and packed out of a 75+ rare one players pack this beast, which was very lucky. I thought that he'd be nice but not playable as he has 3* 3* and I like more versital players instead of the tall strong clunky strikers. I thought well I can at least give him a go and wow. As I said I expected him to be clunky and that he wouldn't feel great on the ball, but believe me HE DOES. 1 directional nutmeg to his left and from where ever on the pitch you shoot it goes right into the net. He is so strong he shields the defender from the ball, it doesn't matter which defender. Decent passing, very very fast and feels great dibbling

Pace in combination with strength

Feels unexpectedly very great on the ball while dribbling