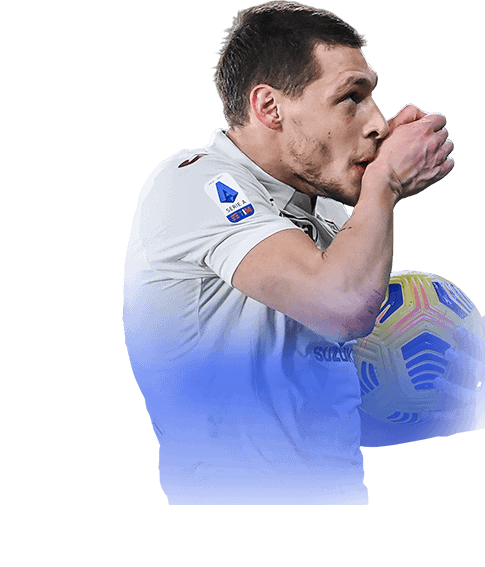 His real-life stats are currently 0 goals and 0 assists in 4 matches in domestic competition. He also received 0 yellow cards and 0 red cards.

This player is something special, I had to do him to green link my Insigne and rightly so I did this objective. In the first match I played with him he banged 7 goals in weekend league.

I never do reviews but his finishing, attacking positioning, even his pace was what I needed to write this review

This guy can score from anywhere left right and centre.

I'm not a guy who abuses skills so 3 star isn't a huge problem for me, but his 5-star weak foot is a huge plus!

If you have the time to do this card, I really encourage you to do so! He is so worth it!!

I had TOTS Immobile at ST first and Shooting and pace feels very similar.

He shoots very hard and well.

His 5* weak foot is a massive plus.

Really enjoyed him in a 2 striker formation, but haven't tried him as a solo striker.

He feels very smooth on the ball.

Scores headers when he isn't marked by massive defenders.

With an engine he feels pretty fast.

Love his strength, hard to push off the ball.

Only his longshots aren't that good, but who scores them in FIFA 21 anyways.

Before this objective dropped i had quit playing fut and doing objectives because they were getting boring, so i was just completing random player picks and sbcs. Two days after he dropped i noticed that in Milestones you could get free packs for easy goals in Squad Battles and since i Had plenty of time so I decided to combine them and do both objectives. WHAT A GREAT DECISION! I didnt expect this card to be so insane and for only 8 Squad Battles Games! Pace feels great (especially with engine), his dribbling feels very smooth despite his bodytype and his shooting is OUTRAGEOUS. I expected those to be fair after looking at his in-game stats, but the thing that surprised me is his Physicallity. He already has 93 phy but his in-game strength was NUTS. Overall a great card and a very fun one to use. In his first 5 games he scored 9 goals and made 5 assists. (I am Div 3 btw)

Only 8 games needed to complete him

Passing is amazing for a Striker, could even play CAM/CF

Sold my TIF CR7 (over 600 games, over 800 goals) just because we're so late in the game and wanted to try something different and fun and unlocked this man and put him in place of CR7 and holy hell this guy is really really good.

His pace was really a shock, he is pretty rapid for a guy of his stock and build.

Strong as an ox. Felt like his physical was like cheating at times. Won games for me on the 120th min at times, thanks to his great stamina and his attacking AI always looking to make aggressive runs.

His passing was pretty damn good for an out and out 9.

Shooting is incredible. Through my personal experience, his shooting felt on par with CR7 if I'm being honest. The 5* WF just makes everything even better. Incredibly unpredictable in the box. A dangerously clinical forward.

His dribbling and overall feel on the ball is really nice. Super responsive (engine chem). The lack of 4* skills does not bother me as i don't really skill often. His runs and aggressive attacking AI makes up for the lack of that in my opinion. Dont use him like a Neymar, that would only be your fault and not the players fault. He's an out and out 9 with incredible attributes and so much to offer.

Overall, incredibly happy with this card. He's very unique in what he brings to the attacking forefront. The brute strength, pace, clinical finishing, overall distribution. Reached gold 1 with him and opened me up to having more coins and being able to upgrade other parts of the squad after selling CR7 so that's another pro in itself. Good luck to all!

fights for the ball

i really dont have much to even complain about this card. if i had to nitpick, maybe he can feel just a tad clunky in bad gameplay and i guess for some the lack of 4* skills but i dont really skill much so for me it is not an issue at all. his positioning makes up for a lot.