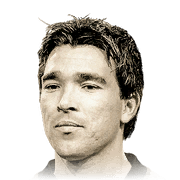 Let me start of by saying this. You're probably looking into completing prime icon moments Deco and so you wanna know what others have to say about him. Maybe that isn't the case but in this review I'm gonna explain to you what I think about Deco, how he played for me and if I think you should complete him. I'm a gold 1 div 2 player and used the hunter chemistry style, he played for me as the center CM in a 5-3-2 or as a right CM in a 5-2-1-2. I'd also like to say that I'm not a very sweaty player and the most important traits for me in a CM is great passing and dribbling.

Deco's pace is good enough, but nothing extraordinary. If you're someone that's all about pace and needs every single player to feel like Mbappe, you'll be let down. The pace is good enough for him to make good runs in behind defenses, rush forward with the ball or catch up to players. (Note: he can catch up to players but making interceptions is very hard with Deco due to his low defense.) So the pace is fine, but nothing special.

In the 10 games I played with him in champs he scored me 3 goals. 2 of those with his 3 star weak foot, which is quite impressive if you ask me. The shooting on this card isn't anything spectacular so I wouldn't play him in a attacking role(even with a hunter), but if he gets into the opponents box he can definitely do some damage. Just don't expect him to bang in a goal every single match from the CM position.

Even though I rate his dribbling higher, the passing is phenomenal. With one through ball you can easily get past 3/4 man like they're not even there and be 1 on 1 with the keeper, it's just ridiculous. I have absolutely nothing awful to say about the passing and would rate it a 10 if it wasn't for the 3 star weak foot. Sometimes he makes passes on his left and whilst short passes will probably reach it's target, long passes will be lost. It happened quite a couple of times for me which brings the score down.

If you've played with Frenkie de Jong this year and enjoyed him, Deco will feel amazing for you. In general I'd say Deco feels very much like De Jong, with better shooting, passing and dribbling and worse defending and physical. The dribbling's just really good and smooth on Deco, not perfect but one of the best dribblers I've used so far. Getting past a man on you're way to the goal should be no biggie.

I can't say much about his defending, the stats really tell the story to be honest. Defensive contributions are just not gonna happen with this guy. Forget about boosting it with a chem style, just don't get Deco if you want someone that can defend, cause he can't.

The stamina is good. He lasted me till the end of extra time. Everything else just sucks, low strength, aggression and forget about winning headers with this guy. Again, don't get Deco if you want a physical presence.

Average rating based on all scores: 7.3

I'd say that's about fair. If you've got a team with rare golds only that isn't very high rated you can definitely slot Deco in there and he will stay there for quite a while. If you already have a good team I would strongly advice against completing this SBC. Deco doesn't have any stats or traits that make him exceptional. Whilst he is really good, he's pretty much replaceable and definitely not unique in any regards. Good player that can be great for some people, but not a gamechanger in my opinion. If you do decide to get Deco, I'd advise you to buy his prime first so you can test him out, hunter chem style is the best in my opinion because the passing and dribbling stats are great already. I'd suggest you to either play him as a center CM so he can distribute balls and decide the pace of the game or as a right CM so he can use that right foot when he gets in the box.