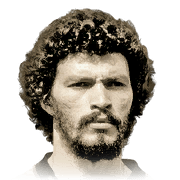 Socrates...well i was unsure whether or not to splash 1 million coins on this guy but im so glad i did because he is a real top performer he has it all.

Goals and assists galore some say his body type is a put off at 6ft4 but he has the agility to cruise past players like there not even there and the strength to brush them off too yet has the pace to blitz past players like varane.

without doubt would recommend this card as a CAM using engine to up agility and balance is key or as an ST using hawk as he can easily play both as he is a clinical and not far off Gullit in that matter can play all over the pitch.

-Pace to beat a man.

-Strength to shrug anyone off.

-Passing so accurate its on a six-pence.

-Dribbling great on the ball.

-Heading is on target anytime.

-Stamina last all game and some.

-Balance only con but rarely ever comes into play.

Sheesh, where to start. I used o Doutor's baby icon last year, and I've been a fan ever since. This year is the first year I've been able to use his prime icon and this is on the huge W's (R9, Cruyff, Eusebio, Gullit etc.) in my opinion the best player in the game.I used him in the 4-1-2-1-2 (2) on cam behind Cantona and Eto'o. And I'm not joking when I say that this is the best affordable cam in FIFA 21. I sold Neymar a while back to get this card and I don't regret it.

The most positive point of this card is the 5* weak foot in combination with 93 long shots. Everything you shoot on the edge of the box towards the goal flies in, both with left and right. Finishing 87 is enough for this cam to ram in all the 1-on-1 chances he gets. 85 acceleration is more than enough to sprint past players like Varane or IF Joe Gomez. He can play as a cam as well as a striker because of this acceleration. And the ball retention, oh boy, is that good. With 84 strength, Socrates keeps the defenders/defending midfielders off him. 84 strength combined with 88 heading accuracy ensures that if you don't dare to build up, you can always kick the ball to o Doutor. The only negative thing about this card is the 60 balance. Therefore, this card would be a no go for real pro players. On top of that, o Doutor is 1.92m / 6'4''. Therefore he has high & average+ body type where a Neymar for example has a more skinny body type. But for your average Gold 3/Gold 2 player, it really is a fan-tas-tic card.

He's outstanding, great with the ball, deadly finisher(composure 97 bruh), the balance feels more like 75 it's not really that bad as you think

Yes, i bought him, you're not wrong. And i'm not crazy, believe me. Just felt tired of Mbappe as he is in every squad. And if you feel tired too, go ahead and try him. He made me enjoy the game again, he's so different from every meta card.

You need like 5 matches to really enjoy his movement

Balance (but not that bad as you think)

Pace (but not a big problem with hunter)